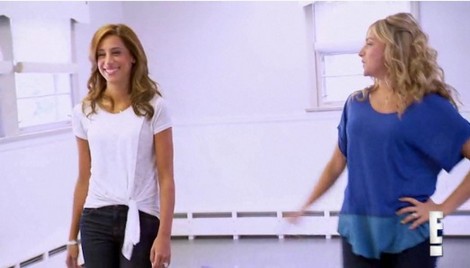 Tonight on E! is an all new episode of Married to Jonas. On tonight’s show called is called “Emergency-In-Law”  the Jonas brothers give Kevin Sr. a Father of the Year award; Kevin cohosts “Live! With Kelly” and gets a shocking phone call about Dani.  If you missed last week show called “In-Law tervention” you can read our full and detailed recap here!

On last week’s show Kevin could have easily hire a contractor to plant a tree, but he wanted to do it himself.  He thought,“It can’t be that hard,” or can it? Well, Kevin thought  this is was simple home improvement project and since he put up his Christmas tree lights himself, then this would be a breeze.

On tonight’s show Dani attends a movement class in order to strike the right pose for an upcoming photo shoot. Will she be able to loosen up in front of the camera?  Kevin Sr. is presented with Father of the Year award; Kevin gets a shocking phone call about Dani.  Kevin cohosts “Live! With Kelly” on July 4th. Kevin learned being a host means, “you have to be able to do anything, stacking cups, riding a tricycle, and even getting dunked in a dunk booth!”

Tonight is going to be a great episode that you won’t want to miss, so be sure to tune in for our live coverage of E!’s “Married to Jonas” tonight at 9PM EST! Meanwhile, while you wait for our recap hit the comments and let us know what you think of season 1 of “Married to Jonas”, so far!  Check out a sneak peek of tonight’s episode below!

Tonight’s episode: Kevin is looking at the security camera footage and sees Dani’s father, Bucky Deleasa, doing chores and improvements around the house when they are not at home. Kevin’s father, Kevin Jonas Sr. is being honoured with a “father of the year” award and he and Dani are heading out to Los Angeles to be there with him and the rest of the family. Dani sometimes has to practice what she has to say at these events because she gets all confused, but her mother-in-law Danielle doesn’t understand why she has to practice.

Back at home, Kevin gets an offer for he and Dani to be on the cover of Social Life Magazine. Dani is not crazy about the idea, she hates to be in the limelight because people call her ugly and a gold digger. In the end, Dani gives in and Kevin tells her it’s going to be lots of fun. Dani’s sister, Dina, take her for some movement lessons to help her with the magazine shoot. Dina has no problem with the moves but Dani does because she’s so robotic.

Kevin and Dani get all dressed up for the photo shoot and Dani is finding the whole experience awkward because it is so rehearsed and not natural. In the end, Dani did enjoy the great clothes and the great people that were easy to be around.

At dinner, Kevin and Dina start talking about having a baby with Dina and Brian and get into a disagreement. Kevin doesn’t mind having a baby while he is on the road and Dani is not that crazy about the whole idea. Kevin reveals that he and Dina have to host an event in the Hamptons for the magazine photo shoot they did and want to invite Dina and Brian. Kevin gets an invite for the part on his cell phone, it’s one of the photos they took in the photo shoot. Dani is not confident about her photos, she thinks they have to be perfect and is afraid the fans are not going to like them.

Dani is really nervous about hosting the party for Social Life, Kevin has to go do Live with Kelly and asks Dani to go with him but when she is a little hesitant about fitting in, he tells her to stay home and relax.

Kevin had a great day on the show, he gets home and Dani is not home so he takes the dogs for a walk when his cell phone rings. It’s Dani and she has been in an accident.

Dani and Kevin are back from the hospital, Dani’s car was hit and other than some bruises and being shook up, she is ok. A few days later, Dani is feeling better and Dina comes in to show her the photo shoot they did, it turned out fantastic. Dani realizes that she was worried for nothing. Dina tells Dani that she was a little disappointed about not going to the party in the Hamptons and Dani admits that she was also disappointed, but everyone is relieved that Dani is ok.