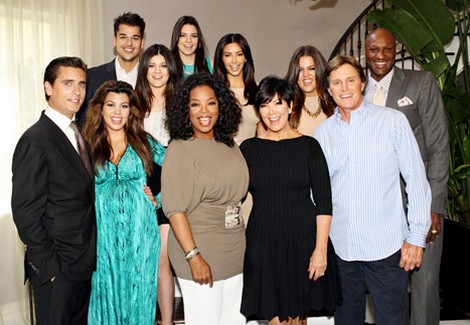 Tonight on E! is an all new episode of Keeping Up With The Karadshians called “Kardashian Therapy Part One”. On tonight’s show Oprah comes to the house to interview the family. Kim’s desire to explore life as an individual threatens her sisters. If you missed the last show called “Tales From the Kardashian Krypt”, we have a full and detailed recap for you here.

On last week’s episode Kris wants to get the family together, forever.  She asked Bruce if he wants to be cremated  or does he want to be buried.  Bruce was far from pleased.  The rest of the family is not interested and Kris planned like she was planning a party regardless of how not interested the family was.

On tonight’s show a Kardashian special event kicks off with one word “Oprah” … you know this ones gonna be good.  The clip for tonight’s show is hilarious the family looks like the president arrived when Oprah rings the door bell.  Star struck anyone?

Kourtney Karadshian blogged about tonight’s episode, “Oprah and her entire crew from Oprah’s Next Chapter came to my mom’s house to shoot our interviews and of course we had our Keeping Up crew there to capture every moment so that you guys can all see what went on behind the scenes.”

Tonight is going to be another crazy episode that you won’t want to miss, so be sure to tune in for our live coverage of E!’s “Keeping Up With The Kardashians” tonight at 9PM EST! Meanwhile, while you wait for our recap hit the comments and let us know what you think of season 7 of “Keeping Up With The Kardashians”, so far! Check out the sneak peek video of tonight’s show below!

Tonight’s episode: The family is so excited that they are all going to be interviewed by Oprah. Kanye West is over at Kim’s house with his stylist to give her a makeover, he inspires her to be more of an individual and she is so excited to see what his take is on her fashion. At the end of the makeover, Kim has a huge pile for donation but she doesn’t have to worry, Kanye has promised her that he will replace it all for her.

Khloe goes over to Kim’s house and she is shocked at how much of Kim’s stuff is going, she is almost having a break down over it and its not even her stuff.

Rob is in Vegas, he is judge for the Miss USA pageant and calls his mom about the men’s Dash store that he wants to open, but again he feels like she doesn’t take him seriously. Rob meets up with Kim, she is in Vegas to launch her new perfume, he tries to talk to her about his sock line and the name he came up with “Arthur George”, but they knock heads over the name of the brand.

Rob is getting interviewed on the red carpet and all the questions for him revert back to his sisters. Arsenio Hall meets up with Rob backstage and tells him that he made him finally think about his socks, to which Rob was really proud.

Kris, Kourtney, Khloe and Kim are having a business meeting to talk about starting a new makeup line. Kim doesn’t want Kardashian name on line and Kourtney doesn’t understand why not.

Rob is in the car with his sisters and his mom, he brings up the subject of his opening a men’s store and Kim interrupts and says something rude to him, Rob calls Kim selfish. Rob then tells his mother that he literally has no income and she barely listens to him as she is just thinking about the Oprah interview.

Just before Oprah arrives at the house, Kim walks into the hallway with the rest of the family and Kris says, “Oh, there’s my favourite daughter”, is this woman for real? Does she realize what she does to her other children when she says that? Dumb.

Oprah tells the family that they look as good as they do on television. First, everyone takes photos in front of the staircase.

The family goes one after the other and gets interview by Oprah, Kim probably had the most intense questions in her solo interview because she has the mostR intense life.  This whole interview with Oprah is a dream come true for the girls, but Rob is really feeling left out.

The whole Oprah experience was wonderful, the whole family has a crush on her after she leaves.

Kourtney wants to have a family meeting to discuss the issues all the issues with Kim. Kourtney calls the meeting a family intervention and Kim thinks it is the most ridiculous thing ever and is just not into it. Kim calls Kris who tells her that she would go if everyone else is into and thinks that Kim should also go.

Kim and Kourtney are getting their makeup done for a Jimmy Kimmel interview, Rob and Kris is there when Rob loses it and calls Kim selfish again. At the intervention Kim says it is not for her because she is a really logical person. Right away, Rob tries to talk and the women interrupt him. Kourtney tells the therapist that before they came into the room, Kim and Rob were violently yelling at each other.

Meanwhile, Scott is alone with Mason and asks him who he likes better, mommy or daddy. Mason answers mommy and daddy, the child has more sense the father.

Back at the intervention, Kim tells the therapist that she is closer to Kris because they can relate to each other more.  When Kris is questioned why she takes so long to respond to her children, she comes up with a lame excuse that she is busy with business, but Kourtney feels that she should be able to put her children first.

The talk moves to the fact the Kris’s favourite daughter is Kim, but again Kris waves it off and says she just needs to prioritize her time better.

The focus moves to Rob, he tells the therapist that he feels like he is a loser in his family because when there is a business opportunity for him, his mother ignores it. Rob starts to get really upset, crying and leaves the room with Khloe right behind him. It takes a few minutes, but the therapist goes to look for Rob and unbelievably his selfish mother doesn’t even budge off the couch to go see her son.

Unfortunately we have to wait until next week to see what happens, see you then.