Keeping Up With The Kardashians Recap: Season 7 Episode 6 ‘Dominican Republic, Part One’ 6/24/12 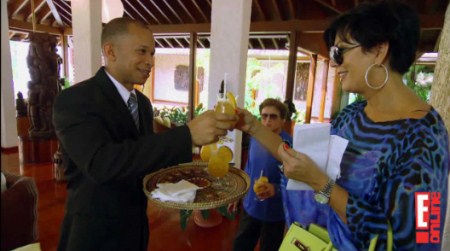 Tonight on E! is an all new episode of Keeping Up With The Karadshians. On tonight’s show Kris Jenner plans a family vacation to Dominican Republic. If you missed last week’s show called “The Man In The Memoir”, we have a full and detailed recap here for you.

In the previous episode, Kris met Todd Watermann at the tennis court; he is the man that she had the affair with over 20 years ago which ended up destroying her marriage to Robert Kardashian, which was her biggest regret of her life. Kris tells Bruce and the kids about her meeting up with him, but what she doesn’t reveal is this weird obsession she has to stay in contact with him.

Meanwhile, Kourtney pushes Scott to go out with Kim because she doesn’t want to, then when they have fund and want to go out again, Kourtney gets jealous and wants the late night rendezvous put to a stop.

Tonight, Kris plans a family vacation and at first Kourtney causes herself, Scott and Kim to miss the flight. When everyone arrives the whole family is on vacation but the drama isn’t. Bruce gets annoyed with Scott who says that he doesn’t know why Bruce calls himself Mason’s grandfather because he’s not. Kourtney tells Kris that she is not one to give relationship advice.

Tonight is going to be another crazy episode that you won’t want to miss, so be sure to tune in for our live coverage of E!’s “Keeping Up With The Kardashians” tonight at 9PM EST!  Meanwhile, while you wait for our recap hit the comments and let us know what you think of season 7 of “Keeping Up With The Kardashians” so far!  Check out the sneak peek video of tonight’s show below!

RECAP: Tonight’s episode begins with Kris a nervous wreck.  She was supposed to meet up with Todd, the guy she hooked up with while married to Robert Kardashian, but chickened out.  She felt it was a very bad idea to meet him even for a minute.

The family is planning their next big vacation and they have decided on Ireland. Unfortunately Khloe can’t make it because she needs to be with her husband.  Kourtney takes Kim shopping to drop the mini-bomb that she’s not going to Ireland either.  The family decides to pull a location out of a hat and in doing so Ireland is nixed in favor of theDominican Republic.  I blinked and all of a sudden, they are all fighting over flights and in the airport ready to board!  Except for Kourtney and Scott.  She is tweaking out about being pregnant and not wanting to have to travel and do layovers at this stage in her pregnancy. Kourtney’s indecisiveness causes Kim to miss her flight.

The trip starts off with Bruce stewing over Scott.  He feels that Scott is thankless and that he is handed opportunities to do things and then takes them for granted.  His mood lifts almost immediately when he realizes that Khloe is surprising everyone with her presence in theDominican Republic. Bruce vents to Khloe about how angry he is with Scott. If any part of this show ever seems genuine, it’s the relationship between Bruce and Khloe.

Quick.  Cut to the scene where Kendall, Kylie and two of their friends dance around in bikinis with war paint on their faces.  They’re fun, see!  In the staged fun, Kris breaks a toe (of course) and then grumbles over Kourtney, Kim and Scott still lost in their travels.

Kris decides to “soldier on” and rents a boat so that the family that has shown up can bond and relax.  Kris drinks a bottle of wine and then thinks she can drive a jet ski.  When Khloe remind her it’s ILLEGAL to drink and drive, Kris quips, “This is a different country.”  The next scene shows Kris trying to drive that Jet Ski.  Later she jumps into the pool clutching inflatables, clearly drunk too.

While the family is out on the boat, Kourtney, Scott and Mason finally arrive and settle in.  The rest of the crew eventually joins them poolside and Bruce gravitates towards Mason.  When Scott tries to interact Bruce excuses himself pretty quick.  Scott realizes there is an issue.  Kris informs him that he is spoiled and unappreciative and that everyone has been talking about him the whole time.  He reminds them that Kourtney is super indecisive and he has suffered through two days just too actually get her there for the family.

Scott doesn’t understand how he has hurt his relationship with Bruce because in his mind, they have no real relationship.

Khloe and Kourtney have a chat about Kris wanting to meet up with Todd and they agree it’s a horrible idea.  Kris makes a huge mistake by attacking Kourtney’s relationship at the dinner table.  She mocks Kourt about her indecisiveness over work and having another baby.  She takes a fatal shot at her relationship with Scott and Kourtney swings back, informing her that she won’t take relationship advice from someone that is sneaking around to meet up with a guy she still has unresolved feelings for.  Bruce starts to lose his mind over the Todd situation.  He storms away from the table and the girls all leave Kris sitting alone as well.  Tune in next week to see the family fireworks.