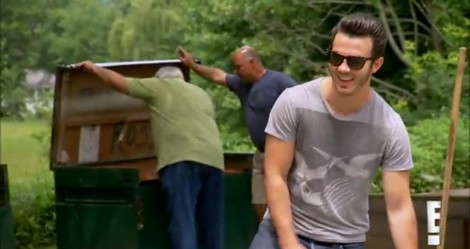 Tonight on E! is an all new episode of Married to Jonas. On tonight’s show called is called “In-Law tervention”  the family confront Bucky about his life-threatening eating habits; Kevin attempts home-improvement projects.  If you missed last week show called “Texas With The In-laws” you can read our full and detailed recap here!

On last week’s show Danielle  Deleasa and Kevin Jonas went to Texas to visit the Jonas compound where mom, Denise Jonas and dad, Joe Jonas, live.  During the Texas visit we learned that Denise is a control freak and the mother-in-law from hell. Grandpa, Jerry Jonas has been diagnosed with cancer and Danielle is anxious and has been battling with her condition for years, but she is on anti-anxiety medication to alleviate the symptoms.

On tonight’ show Kevin could easily hire a contractor to plant a tree, but he is going to do it himself. It can’t be that hard, or can it? Well, Kevin thinks this is a simple home improvement project and since he put up his Christmas tree lights himself, then this must be a breeze.

Meanwhile, Danielle goes to the spa for some relaxation, most likely from all the stress that Kevin’s Mom Denise put her through in the last episode.

Tonight is going to be a great episode that you won’t want to miss, so be sure to tune in for our live coverage of E!’s “Married to Jonas” tonight at 9PM EST! Meanwhile, while you wait for our recap hit the comments and let us know what you think of season 1 of “Married to Jonas”, so far!

Tonight’s episode: Buckey is winded and Kevin is concerned because he had a heart attack two years and hasn’t changed his eating habits since.

Kevin discussed buying some trees from Buckey’s friend Paulie so he can give their house a little privacy.

Dani and Kevin have been hosting a lot of people at the house lately and Kevin has planned another party for the weekend for Dani’s sister. Dina, but he forgot to tell Dani about it.

Kevin is planning some home improvements, he wants to plant a tree and thinks it would be no big deal to do it on his own.

Dani is with Dina at the spa, they are taking some time for some stress relief before Dina’s party. While they are getting a pedicure, Dina tells Dani on how it’s so weird that she can pick up a People magazine and read about her.

Kevin is operating a mini bulldozer to dig the hole for the tree when he hits the sprinkler line, Dani arrives home and finds him in the middle of it and calls the whole thing stupid. Then Dani notices that the gate is broken

After the digging mishap, you would think Kevin would learn not to do things around the house himself again but when it’s ready to put up tents for Dina’s party, he decides to do it himself and struggles. Kevin is left with a big hole in the ground, the tree is delayed and won’t be arriving before the party. Kevin decorated the mound of dirt near the whole into a volcano, which looks absolutely ridiculous.

Bucky gets caught eating a hot dog at the party and everyone is getting mad at him. The weather turns and it starts raining so the family moved the party indoors, but it’s still a success.

It’s family intervention for Bucky, everyone wants him to make a lifestyle change before he ends up back in the hospital. Bucky walks in and tells everyone that he is in better shape than them. Kevin tells Bucky that he is not trying to take away his passion for food, he just wants him to make better choices. Bucky is feeling terrible about how sad his girls are about this and Dani reminds him that he promised that he was going to change.

Dani and her sisters decide to take Bucky to a Pilates class and he describes the room as a torture chamber when he walks in. Bucky surprised Dani, he was a little more flexible than she thought he was, she was impressed.

The tree arrives at it weighs nearly 9000 pounds, Dani walks out and asks Kevin if he is nuts. In the end, Kevin gets a lot of help planting the tree and Dani is happy with the results.