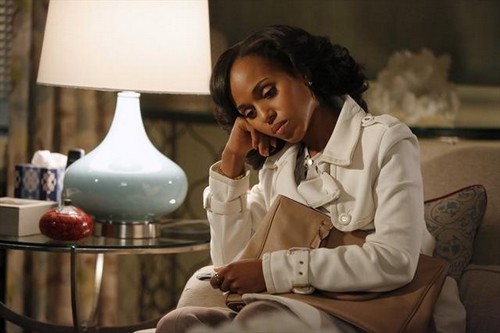 Tonight on ABC is a whole new episode of SCANDAL called “Spies Like Us.” On tonight’s show dirty little secrets are starting to come out. Did you watch last week’s episode? We did and we recapped it here for you!

On last week’s show when the wife of a governor was raped, the governor took the law into his own hands and then asked Olivia and her team to come in and clean up his mess. Meanwhile, both Cyrus and the President were caught off-guard when Cyrus’ husband, James, decided to return to his career as a journalist covering the White House.

On tonight’s show Olivia receives an anonymous letter containing a coded warning which could expose Huck’s dark past. Meanwhile another Pope & Associates secret has already been exposed and Olivia asks Harrison to step up and handle it. And in the White House, Cyrus and Fitz are dealing with the ramifications of Cyrus’ husband’s first front page news story.

Tonight’s episode looks like it is going to be a great episode and you won’t want to miss it, so be sure to tune in for our live coverage of ABC’s “Scandal” Season 2 episode 6 at 10 PM EST!

Tonight’s recap:  Tonight’s episode opens with an older man running to catch a mail carrier as she empties out a mailbox. He hands her a big yellow envelope addressed to Olivia Pope and then as the truck pulls away he pulls a gun and shoots himself in the head. Meanwhile Olivia returns home and uses her computer software to eavesdrop on Abby and David. She gets upset when Abby decides she wants her own drawer at David’s place.

Last week Huck met a chick named Becki at one of his AA meetings and he is trying to trust her but that doesn’t seem to be working out so well. He photographs all of her ID and then talks to Liv about his suspicions even though Becki has given him no reason to distrust her.

Liv gets information that leads Huck to completely freak out. He tells her that if his real name leaks out and is connected to Pope & Associates then he has to disappear immediately. Liv begs him to allow her to fix things and he agrees to give her 24 hours before he disappears. Huck says they need to find a man named Sarnoff and if they don’t and he makes things public it’ll make Americans disgusted to sing their own national anthem.

Olivia manages to get a computerized meeting with Nigel Sarnoff but his identity is hidden. Liv wants to bring the five men that Huck once worked in for questioning. Olivia believes that one of them is the weak link that is about to provide Sarnoff with the devastating information and she needs to prevent it from happening.

Harrison walks into Olivia’s office and simply asks her what she needs. Abby is sleeping with David, Liv has had an affair with the president, Huck is a former assassin that needs protecting and Harrison thinks the whole office is weird. He wants to help and reminds Liv that he owes her a big favor so he will do anything to help. He then stops in at a corner bar and gives money to a woman. She makes it clear that she likes David Rosen, but needs the money more.

Pope & Associates all line up near the elevator and one at a time all of Huck’s five former associates arrives. He gives the gang a background on each one and then they try to figure out who is leaking information to Sarnoff. Liv gathers them all in a conference room and refuses to let them leave until she figures out the leak.

They aren’t left alone for very long when Abby, Harrison and Quinn discover that none of the former assassins gave up all their guns before heading into the conference room and they are all holding each other at gun point. Harrison walks in and tells them that Olivia is working on the situation and he gets them to lower their guns, but not drop them.

Olivia gets a Swiss bank account number that Sarnoff sent money too but is running out of time to find out any more. She is in tears on the phone with Huck and he tells her to go home and to not return to the office under any circumstances. When the former assassins realized they couldn’t leave each made a supposed phone call home. One called in a supposed prescription, using the Swiss bank account number. Huck has put it all together and is insisting everyone from Pope and Associates leave and go home.

As the assassins realize who the rat was it’s the now married mom-of-three that puts the bullet in the guys head. They all clean up the mess and leave. Liv returns to find Huck alone and is so grateful to see that he hasn’t left.

Abby is set up by David’s ex girlfriend. She meets with the woman who Harrison paid off and believes that David once beat the lady up. Abby dumps David who looks crushed by the allegations and then goes and confesses her fling to Liv.  Tonight’s episode wraps up with the remaining assassins going home to their now normal lives as teachers and business owners and housewives.  Harrison also finally wears Liv down and she bursts into tears when he asks her to let him through her front door.