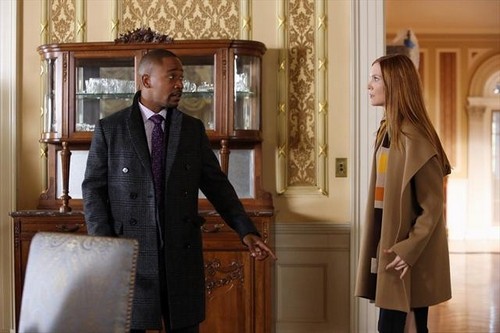 Tonight on ABC is a whole new episode of SCANDAL called “Defiance.” On tonight’s show as secrets begin to unfold, no one is safe. Did you watch last week’s episode? We did and we recapped it here for you!

On last week’s show Olivia received an anonymous letter containing a coded warning which could expose Huck’s dark past. Meanwhile another Pope & Associates secret had already been exposed and Olivia asked Harrison to step up and handle it. And in the White House, Cyrus and Fitz were dealing with the ramifications of Cyrus’ husband’s first front page news story.

On tonight’s show Harrison leads the team in managing a billionaire businessman who seems to have lost his sanity; meanwhile, Olivia and the White House prepare to celebrate the President’s 50th birthday, as James continues to investigate Cytron and discovers something that could change the fate of the country.

Tonight’s episode looks like it is going to be a great episode and you won’t want to miss it, so be sure to tune in for our live coverage of ABC’s “Scandal” Season 2 episode 7 at 10 PM EST!

Tonight’s recap: This weeks’ episode begins with Olivia prepping Senator Schulmann for a press conference where he’ll admit an affair. Fitz watches the television coverage of the conference and tunes everything out once he catches the sight of Olivia in the frame with the senator. He is obviously struggling to get over her. His wife storms in and blasts him for traveling for 3 weeks without any contact. She also reminds him that she’s 32 weeks pregnant and has planned his 50th birthday party in spite of his protests.

Olivia’s team is also trying to prove that a billionaire has gone off the deep end. He divorced his wife took up with a younger chick and is clearly bonkers now.   David is insisting that he has proof that voting machines for the last presidential election were rigged and he places the proof in the hands of one person that can help him, James, but he isn’t convinced and it won’t be an easy sell.

Fitz celebrates his birthday with a small dinner party where he tells the story of how the election was won and he focuses on a small town in Ohio called, Defiance. This makes James think and after dinner he goes digging through voting records before Cyrus catches up with him and makes him leave.  James isn’t stopping there though. He is pretending to be working on a story about voting and asks for the Defiance voting machines. He wants to get his hands on the memory cards which will have accurate results vs. the suspected tampered results.  He gets to the machines and realizes the cards are missing.

As Abby and Harrison were guarding the crazy guys mansion he was inside getting married to his younger chick. That’s one of many things that his ex was trying to prevent because this girl obviously just wants to get her hands on his money. The family is flipping out because this young girl is now the one making all the big financial decisions.

James realizes that one of the machines is missing. There are 150 voting machines on the list but only 149 in storage.  The security guard tells him the last machine is kept under glass at the high school.

Fitz is in his office pouting when a yellow envelope is delivered. He refers to it as surveillance and inside are photos of Olivia kissing Edison. Fitz goes through the photos slamming them on the desk. He is having a really hard time getting over her.

Back at the crazy house, the billionaire’s son confronts him over the family money going to a gold digger and his father shoots him in the arm. Harrison calls Olivia and she tells him to deal with it himself. The father and son finally sit down and hash things out. The billionaire tells him that he’s not crazy, he is just finally having fun and he is purposely not handing the kid his company because he doesn’t want him ending up like he has.

James actually gets his hands on the last voter machine and figures out how to tally the results. He ends up holding a smoking gun.

Olivia seems to have decided to fully reconcile with Edison as she tells him her previous relationship with a mystery man is over for good. They get ready to attend Fitz’s birthday gala and also driving are Mellie and Fitz. She repeatedly tells Fitz she doesn’t want to go. She’s all but begging him to turn the car around and drive home. Instead he steps out of the car and takes a few steps before being shot four times! Tune in next week to find out who shot Mr. President!