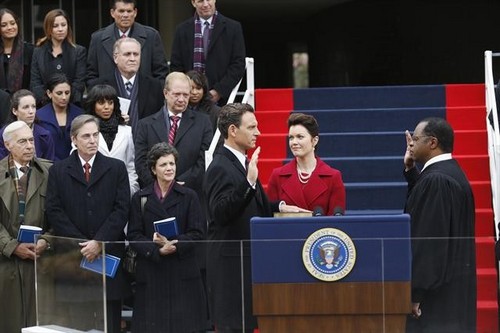 Tonight on ABC is a whole new episode of SCANDAL called “Blown Away.” On tonight’s show a dark horse rises. Did you watch last week’s show? We did and we recapped it here for you!

On last week’s show a national tragedy forced Olivia to return to work at the White House. Meanwhile, we learned more about the first few days of Fitz’s presidency.  The big question on everyone’s mind was Who shot President Grant?  The big news was at the end of the episode last week.  We found out the shooter may have been Huck.  Is it true?  Well we see him with a gun and a hoodie.

On tonight’s show while working in the White House, Olivia helps Vice President Sally Langston; Cyrus stumbles across the truth about James’s secret investigation; and one of Olivia’s associates struggles to come to terms with a shocking betrayal.  We should also find out if Huck is the shooter?  What do you think did Huck shoot President Huck?

Tonight’s episode looks like it is going to be a great episode and you won’t want to miss it, so be sure to tune in for our live coverage of ABC’s “Scandal” Season 2 episode 9 at 10 PM EST! While you wait for the recap, check out a few pictures and a sneak peek video from tonight’s episode below!

Live Recap:  Huck walks into Pope’s headquarters and says that he was set up for Fitz’s. He sits down in the conference room and describes in detail how he shot the president. Olivia looks sicker as each detail is revealed. She orders him to stay put in her office. He’s the most wanted man in America and he needs to stay hidden.

Cyrus takes a phone call from his mother-in-law and finds out that James lied to him about his whereabouts the previous weekend. He was under the impression that James was with his parents which is simply not true. Meanwhile Huck insists that his girlfriend from AA has been abducted and Olivia seems to think she was connected to whomever is setting Huck up. At that point the hotel surveillance video comes in and Becki is on it, alone. She set Huck up but he doesn’t believe it. Or if he does then, as he put it, he’s a trained killer and will take care of it himself.

Huck heads to Becki’s house and as he sits outside thinking about his time with her she appears behind him, holding a gun to his head. She tells him that she shot the president but didn’t fully set him up. She could have left his DNA all over the crime scene. She could have killed him and made it look like he first shot Fitz. She didn’t do these things because she cares. They are exactly alike and she thinks they can be the next Bonnie and Clyde.

Olivia is mentally preparing for Fitz to die and Cyrus tells her that she is the love of his life and she cannot give up on him.

Becki had told Huck that he knew where to find her so when she gets home she finds him waiting, sitting on her living room floor surrounded by spy photos that she took- of him. He grabs her, drops her to the floor and they hook up on top of all the photos. He tells her that he loves her and will leave with her. They’re to meet in an hour but I think he has something up his sleeve.

Olivia finds Huck and realizes that Becki has gotten to him. Liv freaks out saying that Becki put a bullet in his head then framed Huck for it. Huck says Liv can’t tell him who to love. Huck talks to Harrison and it becomes clear that he intends to set Becki up.   Meanwhile Liv is in a conference that is planning out the details of Fitz’s funeral.

Huck’s special place is outside the home of a family that he loves to watch and that’s where he’s supposed to meet Becki. There are no signs of life and a dog passing the home starts to bark like crazy which makes Huck get out of his car. He goes inside and slowly walks through the house finding the family slaughtered. Dad in his living room chair. Kids on the floor. Mom dead in the kitchen shielding her daughter. In the background plays “Becki’s meeting me in an hour plant the gun in her place…”. It’s coming from a throwaway phone and it is Huck’s phone call to Harrison on loop.  Huck is absolutely horrified as Becki has just senselessly slaughtered an entire family.

Olivia reassures Huck that they’ll find Becki and as she tries to console him the police, special ops and FBI roll into Liv’s offices and drag Huck out saying he’s being held under the Patriot Act. Tune in next week to see what happens to Huck, Fitz and everyone else!