Scarlett Johansson And Bradley Cooper Are Into Each Other Again 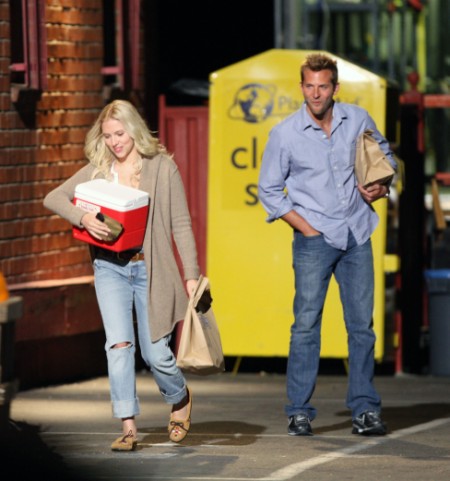 He’s Just Not That Into You co-stars Scarlett Johansson and Bradley Cooper’s relationship is back on. The genetically blessed blond duo were spied at Wolfgang Puck’s restaurant at the Bel Air Hotel last Monday night getting all giggly and hair fondly with each other.

There were whispers that Scarlett was hitting it with Bradley during filming in 2007 but that must have been right before she married and divorced Ryan Reynolds and got attached to crotchety Sean Penn. Gross!

Bradley is single after dating every available up and coming actress in Hollywood so the stars have finally aligned for these two to give it another shot. “They seemed very comfortable together and it was pretty obvious they are into each other,” an eyewitness told RadarOnline.com “Bradley seemed almost distracted by Scarlett’s beauty, especially since she was wearing a very low cut dress, and Scarlett was totally working her charms. She kept flipping her hair when she laughed at his jokes. The chemistry between them VERY evident and they looked totally wrapped up in each other — very cute! They were definitely having more than a “friends” dinner, it seemed pretty obvious they totally have the hots for each other.”

These quotes are ridiculous but I’ll play along. What? No foot in the lap? I thought Scarlett liked that move? And what about her boyfriend, advertising executive Nate Naylor? Would Scarlett be so callous as to kick him to the curb because Bradley’s sniffing around again?

Probably. She’s single and young and he’s hot and famous. Wouldn’t you? But there’s just something I can’t put my finger on about the former Sexiest Man Alive. First off, I always go back to the divorce with Jennifer Esposito after four months. I get why people like Shannen Doherty and Drew Barrymore get divorced that quickly. They’re impulsive and free-spirited dumb asses most of the time, but Jennifer and Bradley were so not. It just seemed… off. And he’s been linked to every actress in Hollywood who needed publicity, I mean a boyfriend, so it’s like he’s the go-to guy for Hollywood fauxmances – next to Jake Gyllenhaal, that is.

So I don’t know if I buy this story. Would Scarlett go there? Bradley has that self-deprecating desperation vibe to him. Do you feel it too? He just doesn’t seem like her type. Obviously she likes pretty and Bradley brings the pretty, but Scarlett likes cool, macho dudes like Leonardo DiCaprio, Justin Timberlake and, unfortunately, Penn (he may act a douche but he is Jeff Spicoli for crying out loud). And Bradley is not cool. Or is he? Am I missing something about Bradley Cooper? Can he bring the cool and the sexy if it’s not written in a Hangover script?