Scarlett Johansson Has A New Slice Of Beefcake! (And It’s Her Bodyguard) 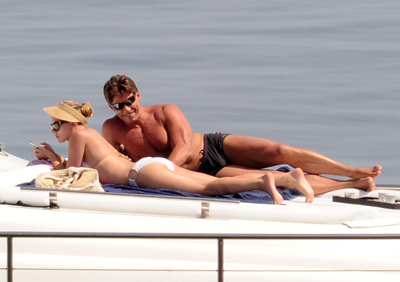 Scarlett Johansson has apparently got a thing for hulking, protective men, as she was spotted this week, lounging on a yacht off the coast of Italy with a man that could give her ex, Ryan Reynolds, a run for his muscles.

However, while the photo agency that took the photos described the “mystery man” as only having eyes for Scarlett, it’s possible that his bulging muscles and single-minded attention may just be an occupational requirement!

According to the New York Daily News, the older man who was lying thisclose to the Avengers actress is her “bodyguard”, or at least that’s what Scarlett’s publicist would like us to believe.

“If you go back and look at photos from the premiere of the Avengers in Rome, you’ll see it’s her security guard,” said Scarlett’s flack, Marcel Pariseau.

And while it looked like the bodyguard was rubbing Scarlett’s stomach and shielding her eyes from the sun, it was all just a photographic illusion, added the seeming defensive Marcel. Apparently, Scarlett’s hired help was actually looking down at his phone! And the idea that the two are having a romantic liaison is totally ridiculous, as Scarlett is still dating her boyfriend Nate Naylor, the rep confirmed.

As if anyone in Hollywood would ever cheat! Pffft. Related: Scarlett Johansson And Bradley Cooper Are Into Each Other Again