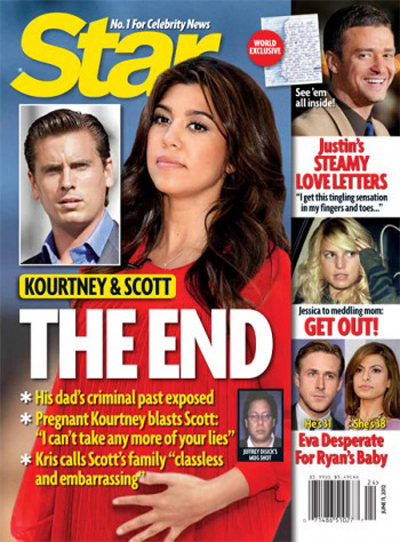 On Keeping Up with the Kardashians and its various spin-offs, Scott Disick‘s family has been depicted as a loving Jewish family, living in a spacious but cluttered home on Long Island. However, the current issue of Star Magazine reveals that Scott may be harboring some dark secrets about his parents and relatives!

Reportedly, Scott’s 62-year-old dad, Jeffrey Disick was arrested for grand larceny and later pleaded to a lesser charge for stealing money from a local bank. He also suffered a bevy of financial problems from liens placed against him and his wife from 1989 to 2008, totaling around $391,000 worth of debt.

Supposedly, Scott’s baby mama and longtime girlfriend Kourtney Kardashian has no idea about any of Scott’s family’s problems, and when she finds out, it’s not going to be good.

“Scott doesn’t even really have a career outside reality TV, and there have been so many stories about Scott’s out-of-control partying and wandering eye,” said a source to the magazine.

“It’s gotten to the point where Kourtney has snapped at him, ‘I can’t take any more of your lies!’

“Sometimes it seems as if he’s built his entire relationship with Kourtney on secrets and lies. When this secret about his father’s criminal past gets out, Kourtney will feel like Scott’s betrayals are never-ending — to her and her entire family.”

Kourtney’s mom, Kris Jenner, has also reportedly called Scott’s parents “classless and embarrassing,” according to the mag, and the couple seems like “fish out of water” whenever they’re with the Kardashians in Beverly Hills. Related: Kris Jenner Admits To Having A Steamy Love Affair With A Younger Man

“With everything else that has put Kris at odds with Scott’s parents,” added the insider. “I wouldn’t be surprised if she also felt they’d be happy to exploit their son’s relationship with the Kardashians for any payoff it could bring.”

To find out more about Scott’s family drama– pick up the current issue of Star Magazine for all the details!