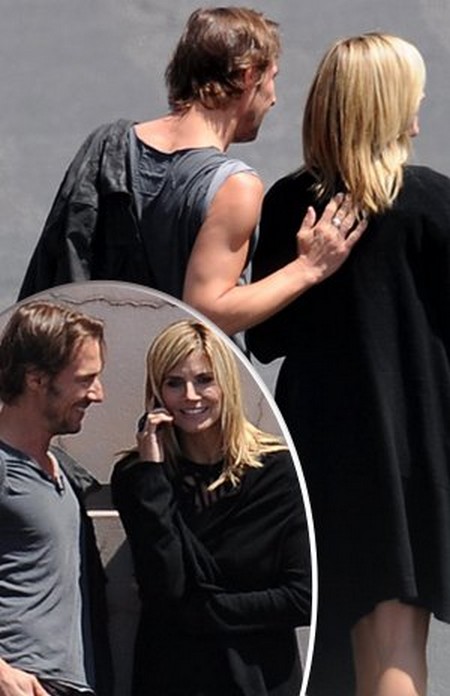 Heidi Klum has moved on to a new boyfriend and her displays of PDA with Thomas Hayo are driving Seal nuts.  Thomas is a judge on Germany’s Next Top Model and he and Heidi enjoyed a romantic picnic together recently.  Seal is now screaming like a jilted lover claiming that Heidi agreed that there would be no dating before their divorce was finalized.

Of course Seal was spotted getting near and dear with the hot blonde Australian TV star and singer, Delta Goodrem, over the weekend but I guess that doesn’t count?  Seal takes further umbrage at that fact that Heidi has introduced Thomas to her dad… Seal thinks that where there is smoke, there is fire – and guess what? Typically he is correct.

Now Daily reports:  Singer Seal’s flipped out after seeing pics of Heidi Klum on a date with her hot co-star.

The 49-year-old’s been left devastated since learning his estranged wife is seeing Germany’s Next Top Model judge Thomas Hayo – and that she’s even introduced him to her father.

A source says: ‘Seal’s been in a terrible mood for weeks and this has really set him off. He says they agreed not to start dating until the divorce was finalised.’

Heidi was snapped sharing an intimate picnic with Thomas during a break from filming.  Pics show the pair giggling as he feeds her food with a plastic fork.  Heidi introduced Thomas to her Dad Gunther when he visited the set in LA last month.

Heidi insists she and Thomas are just pals, but our source adds: ‘Seal thinks there’s no smoke without fire.’

Seal said after the separation was announced in January: “To say that neither of us were grieving would be an out and out lie, and I don’t mind telling you that. I think the operative here is that we are civil to each other and we both have a tremendous amount of respect and love and we try and do this with as much dignity as we possibly can.”

Life goes on and for two hot celebs like Heidi and Seal it tends to get on quickly.  Do you think that Heidi and Seal are broken up over their divorce?  The ones who will suffer are the children, as usual.  Nobody is talking about them – all the hype is just about the selfish antics of their parents.  Seems absurd.