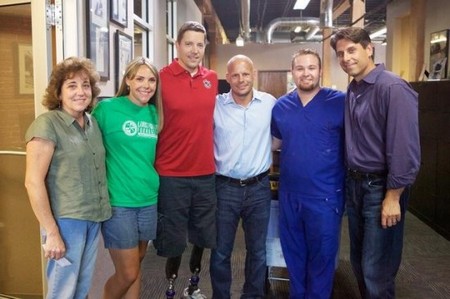 Tonight Secret Millionaire returns with a whole new episode at 8PM on ABC.  Tonight’s episode is called “Chuck Runyon and Dave Mortensen.” Stand by as we cover the show with all the up-to-the-minute details.

On last week’s premiere episode millionaire and world-renowned artist Scott Jacobs and his sheltered 18-year-old daughter, Alexa Jacobs, left behind their family and lavish lifestyle in San Diego to spend six days in Newark, New Jersey – an American city in need – to search for those most in need of financial help.  If you missed the episode you can read our full and detailed recap here.

On this week’s episode of “Secret Millionaire,” self-made millionaires and co-founders of the world’s fastest growing fitness club chain, Anytime Fitness, Chuck Runyon and Dave Mortensen, will visit one of the roughest neighborhoods of Oklahoma City, an area stricken by poverty, rampant unemployment and homelessness.

During their week long stay, Runyon and Mortensen will need to survive on less than $75, the equivalent of welfare assistance for two single individuals. No strangers to hard work, these close friends and business partners will seek out deserving people and organizations that are making a real difference, volunteer with disabled citizens and at risk youth, and ultimately surprise these heroes with donations of hundreds of thousands of dollars from their own fortunes and hope for the future

We will be live blogging Secret Millionaire tonight with all the up-to-the-minute details at 8PM EST so make sure to come back to this spot and watch the show with us. Refresh your computer often to get the most up-to-date results! While you wait for the recap you can check out a sneak peek video for tonight’s episode below.

Two friends and partners who built a fitness center, Anytime Fitness, together are going under cover tonight. Chuck Runyon and Dave Mortensen are both married; Dave has five kids and is a real family man. Chuck has four children and loves the outdoors with his children and wife. The partners know their children are fortunate to be brought up in the lap of luxury and look forward to giving back some of what they have earned in their success.

The partners are headed to Oklahoma City and know nothing about the city. The two arrive in the city, at the airport they are given their mode of transportation for the week, a beat up old station wagon.

The next six days will be tough for the two as they stay in an apartment in the lower end of Oklahoma City and it’s really disgusting. They have $71.00 to spend in one week, “ramen noodles here they come”. They head grocery shopping and have a hard time conceptualizing that they have to survive on only that amount of money.

The men find a sign on a church day for “Oklahoma City Youth Wrestling Froundation” run by Tyler and Shelby that helps children when they are young before they meet up with the dope dealers. The have created a little league wresting team. The kids get to be challenged and enjoy a meal afterwards. Their foundation only needs $39,000.00 per year to function. This kids are missing the key component to be successful and Tyler and Shelby care.

The partners take a drive and find a “Limbs For Life” that helps people who cannot afford prosthetic limbs. Through the donations they receive, they help about 600 people a year. “Limbs For Life” also recycles used limbs by sending them to third world countries because they are not allow to reuse them in the United States. Chuck and Dave roll up their sleeves and help out to prepare a shipment. The visit brings back memories for Chuck about his brother who died 30 years ago at the age of 18 and he remembers how it broke his parent’s spirit.

Tyler and Shelby head back to the “Oklahoma City Youth Wrestling Foundation” and offer free tutoring for the children. Dave is talking to a young child who just lost his mother from a methamphetamine overdose. They then head over to “Limbs For Life” for a game of volleyball. Dave is surprised that none of the people he is playing with consider themselves disabled even though they are missing limbs. Dave talks to parents who have a young child and tell him that without the organization, their child would be in a wheelchair.

It’s the final day and the partners are ready to gift the organizations. They first head to “Oklahoma City Youth Wrestling Foundation” and Dave is reduced to tears when he tells them how great they are. Dave goes on to tell them that they are millionaires and give them a check for $39,000.00. Chuck tells them that they have one more thing, because Tyler and Shelby have changed so many lives, they want to change their lives and give them an “Anytime Fitness” franchise that they are putting $150.000.00 in for them.

The next stop is “Limbs For Life”, more tears from Dave as he tells them that what they do is an amazing feat. Dave tells them he had an older brother that was born with a disabled heart and he didn’t give and neither do they. Chuck tells them they are millionaires, Dave gives them a check for $100,000.00 to help families who have broken hearts.

The partners have known each other for 20 years and are even closer after this experience. After the show, “Limbs For Life” was able to help 50 people on their waiting list, “Oklahoma City Youth Wrestling Foundation” were able to buy uniforms, shoes and an SUV to drive the children to classes; Tyler and Shelby opened their fitness center.