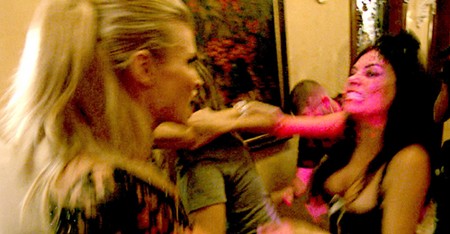 The ladies of The Real Housewives of Miami are pretty hilarious. Every episode is about the oh-so-classy culture of Miami and how they believe they just fit right in. The arrogance is ironic when you take into account the fact that half of the cast is better suited for a south Jersey boardwalk than they are for the parties that they attend. In last night’s episode Joanna Krupa got into a filmed physical fist fight with Adriana De Moura.  The whole incident was motivated by Karent Sierra who is one of those people that likes to throw grenades and watch her supposed friends’ scramble for cover.

The ladies as a general group are not feeling much love for Karent- with the exception of Joanna who seems to believe it’s her job to defend the dentist with a PR person. Yes, Karent is probably the only dentist in the country that believes she needs representation! Adriana has been pissed off at Karent for a multitude of reasons and Joanna decided to go to bat for her friend. As the fight escalated, Adriana not only tried to walk away, but girlfriend was nearly running to get away from Joanna. The dumb and completely self absorbed blonde decided to follow and grab Adriana, probably the stupidest thing she has done all year. Adriana turned around and just nailed Joanna in the face and then backed her a good 20 feet down the hallway before fellow party goers successfully separated the two.

Adriana is usually an arrogant snot but if you watch the show you’ve probably gotten used to it. She also is a hard working single mom and just a little bit endearing. Joanna is a total dingbat that is constantly drunk and overly emotional. My non-violent self was really happy to see her take a hit and quite frankly considering the way she behaves, it’s a miracle it doesn’t happen more often!

How do you think this fight will affect the ladies and more importantly, will they put the blame onto Karent for lighting yet another fire? Tell us your thoughts in the comments below!