Selena Gomez and Justin Bieber Break Up For Ever – No Christmas Plans Together!! 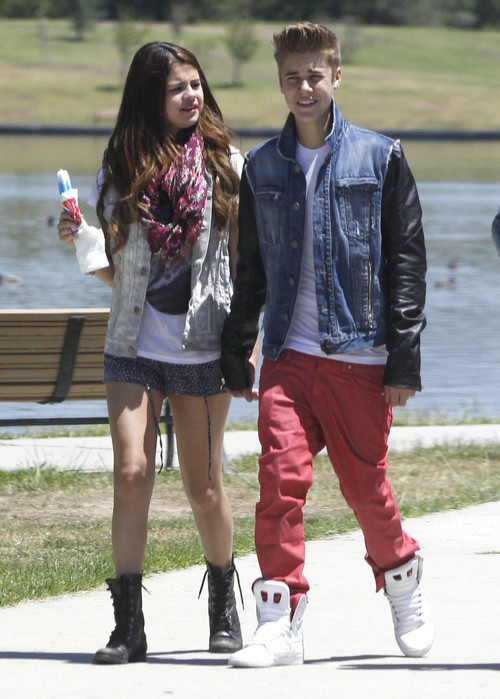 Well that was fast!  It looks like that reconciliation between Selena Gomez and Justin Bieber really did last just long enough for him to have her as his date when he snatched an arm full of AMA Awards! Supposedly Selena was dead tired of Justin’s immaturity and the teen stars’ inability to keep his pants on when a hot chick propositioned him, yet she took him back anyway- at least for a minute. Now the former Disney princess is singing quite a different tune altogether.  On Tuesday she attended The Snowflake Ball in NYC and when asked if she and Justin would spend Christmas together (as they have the last few years), Selena replied,

“No, no. It will be just me this year. I’m gonna go home. I want to go home, and sleep and eat a lot of food with my grandparents. It’ll be awesome.”

So what exactly happened this time around to make Selena reconsider wasting any more time on an idiot like Justin?  Perhaps it was news that leaked out of an after party for the Grey Cup held last week in Canada. There Biebs was spotted with a Selena look-a-like on his lap and after they exchanged niceties, the singer kissed and groped the brunette until she made it clear that she had no interest in banging him. True to his slime ball ways, once he realized he wasn’t going to score Justin sent the girl on her merry way.

Not exactly the way to win back your girlfriend of two years, now is it?  If we at CDL heard about his dalliance than you can bet that word got back to Selena even faster that her man had his hands all over some other random chick and that was said to be a deal breaker. Justin has already made a fool out of Selena once but she’s most certainly not letting it happen again.

Justin will be spending Christmas at home in Canada and I’m betting that at this point Selena is praying his ticket is for one-way.  Will this be the end of them, for real this time? Tell us your thoughts in the comments below!