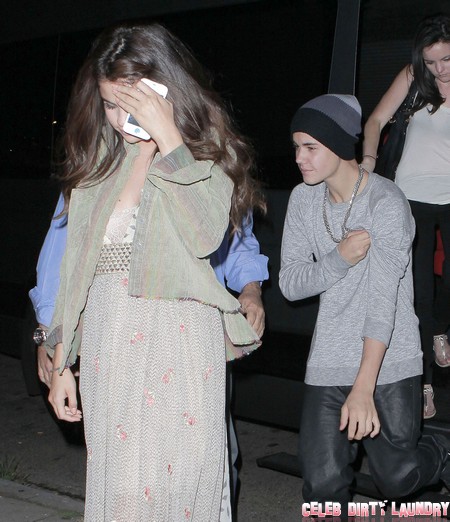 The Hollywood rumor mill is working overtime this weekend churning out the notion that maybe, just maybe, Justin Bieber has put a ring on it.  That’s right, supposedly Selena Gomez has really hooked the young heart throb for more the short term sweet young romance. It all started with a well placed posting over at BlindGossip and the insinuation spread like wild fire. Here was the nugget that started the speculation,

“He is one hot young singer. She is young and beautiful and… well, she doesn’t matter, because young girls everywhere will be envious of her simply because she landed him.

It will all start with a jewelry tease. The paparazzi will snap her with a beautiful rock on her finger, and the couple will act all coy about its meaning. After his fans have been whipped into a complete frenzy, they will announce their engagement. This should all happen within the next couple of weeks.”

Selena and Justin wouldn’t be the first very young couple to get engaged and they also wouldn’t be the last to work the public and press for all their worth before calling the whole thing off!  After a few years together I’m sure both of their PR people are pushing for an engagement to help to spoon feed the fans what they want- the idea of a perfect young love story.  Sure there are Bieber fans that hate on Selena just because he’s with her, but let’s face it, after Kristen Stewart and Rob Pattinson’s relationship hit the scandalous skids, young adults are looking for a happy couple to pull for. It could be Justin and Selena, right?

Will they marry? I say hell no. But fans can enjoy the ride with them for now, right?  What do you think, is there a rock-flashing moment in Selena’s near future or is the gossip wrong? Tell us your thoughts in the comments below!