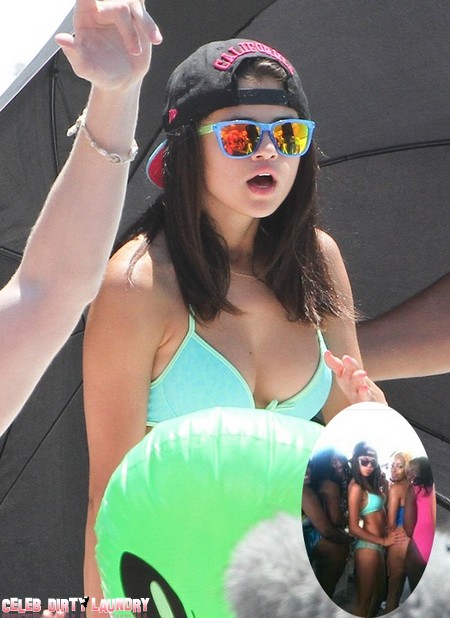 Selena Gomez is pushing the envelope in her attempts to make Justin Bieber jealous.  Now Selena has crossed over and has been spotted grabbing some bikini-clad butt on the set of her new movie ‘Spring Breakers.’  Could Selena be trying to lose that ‘sweet innocent’ image she has cultivated so successfully?

Selena has been making Justin pay attention to her this week by tweeting suggestive photos as well as partying it up with rest of the cast in Florida.  Meanwhile Justin shocked Selena with a  new Mrs. Bieber…

This new photo offering from the set, shows Selena doing some booty poses with a couple of her female fans. As you can see,Selena didn’t mind grabbing a handful of one of the girl’s huge booty. I mean, her small hand barely grabbed a fraction of home girl’s butt,lol!! It looks like they had a good time,though,and Selena looked cute. I like how Selena offered up a little sassiness with her backwards flipped baseball cap,sunglasses,and thug face.

As previously reported, Selena is teamed up with Vanessa Hudgens,Ashley Benson,and Rachel Korine in the new film that has them robbing a restaurant for Spring Break cash,and then getting into even more trouble after getting bailed out by a rapping drug dealer. It’s scheduled for a 2013 release.

Is Selena Gomez starting to break away from her innocent Disney Star image?  Is Selena going to follow in the rebellious footsteps of Miley Cyrus.  Is there a penis cake in Justin’s future?  What do you think?  Let us know in the comments below.