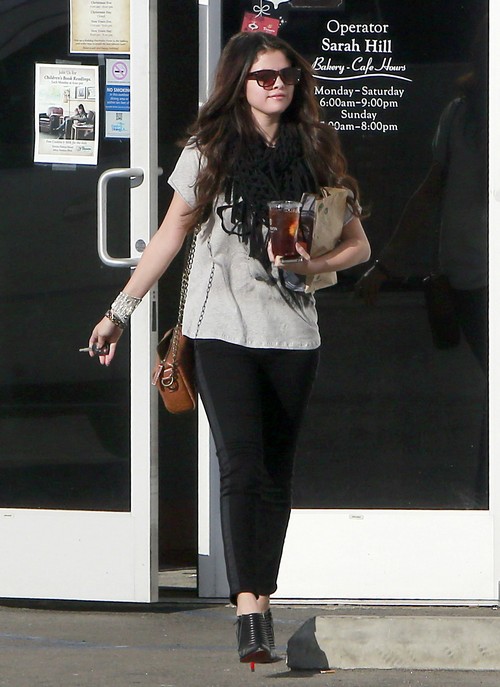 Justin Bieber has once again chosen the low road, choosing once again to betray Selena Gomez’s trust and hook up with Victoria’s Secret bombshell model Barbara Palvin after a concert in Miami, FL. Selena dumped Justin last month after pictures of him with the lingerie model circulated on Twitter, but they’ve spent the night together since and she seems to be giving him a second chance. But now his indiscretion is getting to more than just her heart—Selena is dropping more weight than she should, too stressed about her relationship to eat properly.

A source reported to Life & Style, print edition December 31, 2012, “Her up-and-down relationship with Justin Bieber is taking a toll and she [looks] thinner than ever. She isn’t eating because she has so much anxiety about Justin being faithful and doing right by her.” Selena has always seemed like she had a good head on her shoulders—just days after their first split, she showed up at the Glamour Woman of the Year dinner and gave a dazzling speech about girl power and self esteem. But behind the scenes, a much darker truth lurks. “Selena’s freaking out . . . She’s stressed about the fact that [Justin’s] added more tour dates and they’ll be apart for longer. She doesn’t trust him,” the insider explains. “Justin is on tour again and isn’t living up to his promises to Selena.”

After their first break up, “Selena laid down the law about what Justin must do to make her happy. She was very specific and told him if he messes up, it will be over.” But the Biebs obviously didn’t get the memo—just weeks after their reunion Barbara shared a picture of herself and Justin’s tour bus, she is apparently a new part-time groupie! “They aren’t being bashful about hanging out and getting closer,” a friend of the couple explains.

And while Selena may have been able to dole out some tough love during their split, now all her anger is devoted to Barbara! “She hates how braggy Barbara is about it all, wearing his shirts, tweeting from his locations, and following him all around.” I’m sorry, but she needs to put some of the responsibility on Justin’s shoulders! He’s the one who tells security to let Barbara in; he’s the one lending t-shirts! Selena needs to teach him a lesson and preserve some dignity by dumping him now! Preferably on Twitter. Also, she should leak embarrassing private photos of him to prove that no one can treat her this way! We hope those around her can help her manage her diet better—we don’t want Selena to head off to rehab a la Demi Lovato!