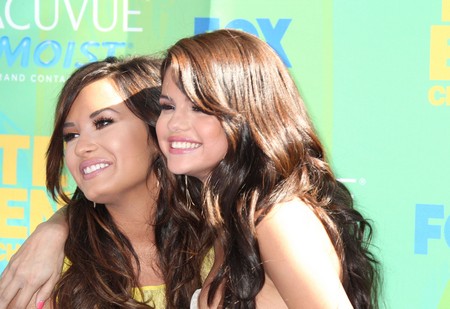 While Demi Lovato says she feels “very lucky” to have Selena Gomez as a best friend, Justin Bieber’s girlfriend expects Demi to stay straight – or else…  If you read Selena’s words carefully they contain a clear warning to Demi that she is getting no more chances!

Demi is a self-admitted former drug addict, bulimic, and cutter and Selena has little patience and tolerance for this sort of behavior.  Demi says she considers Selena to be one of her closest friends but rarely gets to see her because they both work so much.  At least that is the party line.

SEE: Selena Gomez Is Dressing Sexier But Is It For Justin Bieber? (Photo)

Demi said: “I’m very lucky to have someone like her in my life.”

“Selena and I have been friends for a long time, but because of our schedules we don’t get to see each other very often.  Sometimes, we call each other and arrange to meet so we can catch up.”

Selena previously said she did not believe in giving “third of fourth chances” to people when discussing her friendship with Demi.

Selena said: “I believe in second chances, but I don’t believe in third or fourth chances. I love talking through things, and I always want to make things work, if I really love someone, but eventually, if they can’t fix whatever is wrong, or if they’ve done something and then they continue to do it, they’re probably not going to change for anybody. You can’t change a person.”

Asked if she was still close to Demi, Selena was quick to cover herself: “Yes, of course. There’s an amount of love that can never – no matter what – be taken away or torn apart, no matter the situation.”

Selena is all about business and getting ahead – after all why else would she be dating the Biebs?  Oh yes, she loves him…  In any case don’t expect to see career-conscious Selena doing much heavy hanging with Demi.