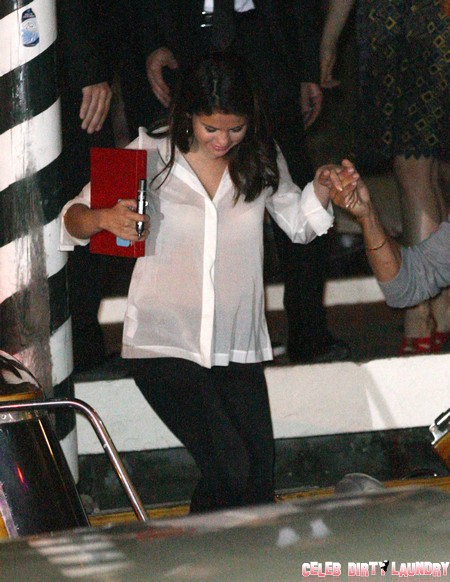 I guess Selena Gomez braless is what we should have expected – but we didn’t.  Selena couldn’t remain a Disney (pop) princess forever. Remember when she was that perky little teen star that even adults liked (unlike the ALWAYS annoying Miley Cyrus)?  She was cute and bubbly and you found yourself watching her even when no kids were around. Well, slowly but surely that Selena is being swapped out for a vampy chick that seems to be taking less is more approach.

She showed up at the Venice Film Festival this week in a daytime outfit consisting of a see through white t-shirt that purposely exposed her bra in the back and the skinniest jeans she could find. Evening attire included another see through top that prominently displayed Selena’s strapless bra beneath it.

I know that Selena is a young woman and her handlers’ are obviously trying to shift her away from being pigeon-holed as the good Disney girl, but you have to wonder if some of the changes are aimed at holding onto her boyfriend.  I mean, Justin Bieber himself seems to be ATTEMPTING to morph himself into something sexy by posting shirtless pics on his Twitter and I’m sure plenty of young girls are taking the bait that he throws out there. Maybe there is a twinge of jealousy there and Selena wants a racier image herself and she could easily fear Justin moving on to a sexier girl as he gets older if she doesn’t step it up.

I think Selena looks thinner in these photos too. She seems to have gone from healthy girl to stick thin and I’m hoping she’s not taking any diet tips from Miley!  Do you see a difference in her weight?  Is she looking too thin?  How about the sexier image, are you digging it or do you fear she’ll go too far and eventually forget to put clothes on before leaving the house!  Tell us your thoughts below in the comments section!

Sexy Selena out and about at the 69th Venice Film Festival