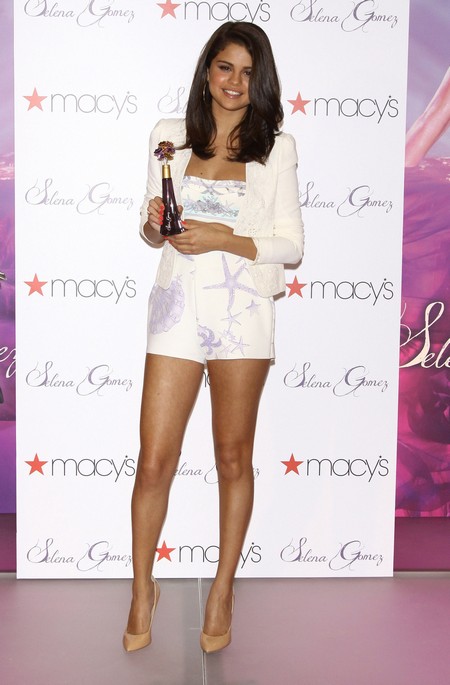 Nineteen year old Selena Gomez’s long legs were on display as she showed us she’s already grown up as she strutted her stuff while promoting her new fragrance. No wonder Youtube sensation and teen idol Justin Bieber is going gaga over this girl!  Selena’s new fragrance launch provided her with the opportunity to look as sexy as possible.

With a toned stomach and her long legs, Selena wowed the crowd with a skimpy bralet and high-waisted shorts. The white items of her attire had some ocean-themed features and embellishments in starfish and shell forms.

In the launch of her new fragrance held in New York, Gomez screamed with her oozing attire that she’s a kid no more. With her beige pumps, Selena Gomez magnified the length of her legs and her lacy cream jacket outfit just made her overall look perfect.

The singer looked very happy as she faced the photographers with her hands endorsing a purple bottle ornamented with lips at the top, her self-titled fragrance. This is her first scent released by Macy’s department store in New York.

In the audience earlier were two boys with t-shirts “Forget Justin and marry me,” which delighted Selena even more. She even posted this on Twitter and her Facebook Page with a picture taken with them. This is aside from the spectacular audience that showed up in the launch, which just proves how influential Selena Gomez is.  In fact, there’s even a group of fans which slept on the streets so they’ll be first in line to meet Selena!

Ahead of her fragrance promotion, Gomez was seen looking spent and tired at the airport few days back. Her boyfriend, Justin Bieber, is currently in London as he will be attending the Capital FM Summertime Ball.

Do you think Selena is growing up too fast?  After all we have to wonder whether her new sexier look is to make Justin pay more attention or to attract some other guy?  One thing for sure if Selena Gomez’s long legs don’t keep Justin around then nothing will.