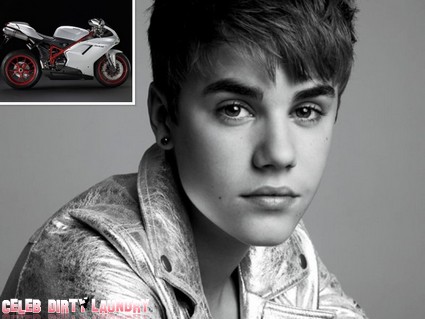 Justin Bieber is splashing the cash again. This time on a hot set of wheels – well, two wheels to be precise. He’s just taken delivery of  a brand spanking new limited edition Ducati Superbike 848 EVO. The bike of superstars!

According to TMZ …the Biebs hand picked his new bike at an LA dealership a couple of days ago. Close friend and mentor Usher has a Ducati and when Justin saw it he wanted one of his own. Usher has a black one – so the Boyfriend singer decided on the ice cool arctic white. The gleaming machine cost $20,000 – small change when you sell millions of records around the world.

There’s only one problem – he can’t drive it yet. The 18 year old has to get his motorcycle license. But I’m sure it won’t be long before we see Justin burning rubber across LA with girlfriend Selena Gomez hanging off the back. It’s further proof the one time Youtube sensation is growing up. Although buying a bike probably makes his Mom a bit nervous.

Justin likes to put his pedal to the metal. He already has a Cadillac CTS-V and Smart Swag Car in the garage. Not to mention the super shiny chrome Fisker Karma which was a recent birthday present from his manager. Luckily he has plenty of room for his growing collection at his new pad just outside the City Justin Bieber’s New $6 Million Love Nest In LA  I wonder if he’ll buy Selena a Ducati so they have his ‘n’ hers bikes? It’s not like he can’t afford it!