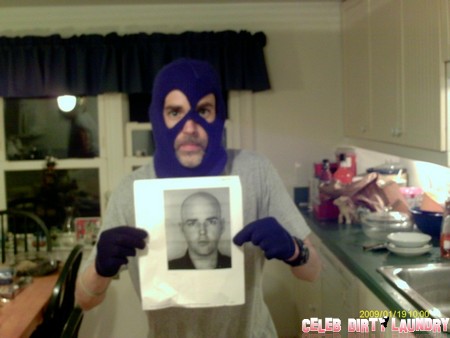 Gino Romano, better known as Jonathan Lee Riches, has filed a restraining order against Sandra Bullock, Kim Kardashian and Jesse James. This guy is completely serious, he claims that he’s gone through “imminent danger and bodily harm.” from all three of the celebrities, from an alleged sex tape that features all of them in it. That’s right… Sandra Bullock, Kim Kardashian and Jesse James all in a sex tape together preying upon this poor man… he really couldn’t be any more insane.

I decided to search this guy up on the web and I found his Facebook profile with only this photo and he looks like a self-made balaclava since the holes are all uneven, also he’s holding up a picture of Jonathan Lee Riches.

Looking up even more into this insane person, I found in Wikipedia that he has filed over 2,600 lawsuits.

Here’s how his story goes; a few years ago he drove by “The Jesse James Outlaw Garage” on his way to a UT football game and says he saw Jesse having sex with Kim on a Harley Davidson while Sandra was filming the two… but that’s not all, it gets crazier. He then says after he was discovered, Kim dragged him inside the garage and was beat by Kim with a monkey wrench and Sandra with a tire iron, while Jesse broke his neck, nose, hip, arm and three of his toes… then Kim put him in a headlock while Sandra’s son kicked him below the belt… because obviously nothing makes a sex tape better then bringing your children along, so that they can get some early education.

Romano then states that he only escaped this mayhem because of his martial art skills; he has allegedly trained for three Jackie Chan movies and also used a “Chuck Norris Machine.” Then, if that wasn’t enough, he gave out the sex tape he has on a cellphone, to his alter ego Riches… yes he’s like Gollum from the Lord of The Rings, there’s two of him inside.

Romano believes that the three celebrities now want him dead and that they have sent the New Jersey Nets, outlaw biker gangs, Disicks (whatever the heck that is), buses with explosives and to top it all off, Kanye West to hunt him down and kill him… what the hell is this guy smoking?

Also get this, his other lawsuits were directed to Nordic Gods, Adolph Hitler, the Holy Grail, every survivor of the Holocaust, the Eiffel Tower, the Roman Empire and the Dark Ages… the list goes on and on with this guy, he has even tried to file a lawsuit against Pluto… yes the dwarf planet and wouldn’t be surprised if also the Disney character.

Just to amuse you, take a look at the petition for his restraining order, it’s just amazing the imagination this guy has.