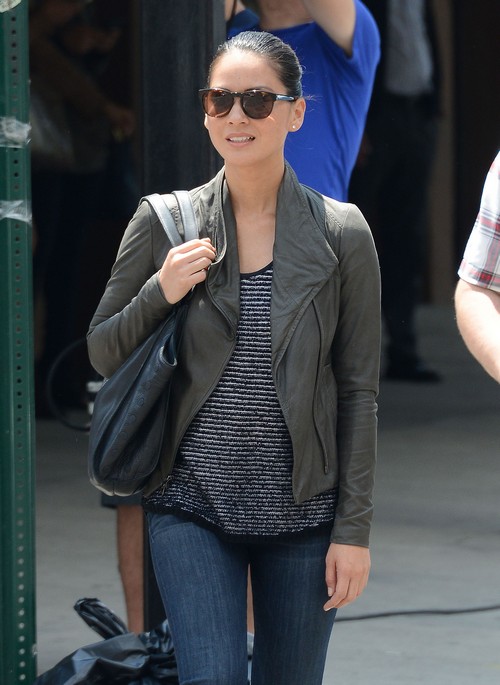 My, it was a busy weekend for phone hackers! Just minutes after provocative pictures of Mad Men star Christina Hendricks surface online, photos of model, comedian and “The Daily Show” correspondent Olivia Munn have also surfaced. Both stars phones were reportedly hacked, delivering Internet creepers a treasure trove of saucy candid pictures. But while sources are admitting that some of the photos are real, they are also insisting the more explicit photos are fake.

Insiders close to Munn—who posed naked for PETA in January and tends to wear little amounts of clothing in her photos anyway—are admitting that the photos showing the actress in swimwear and lingerie are real. Apparently, some of these photos were taken from her social media sites and some were old personal photos that Munn took for her ex-boyfriend, actor Chris Pine, in 2009. However, sources told TMZ that all nude photos that are supposedly the 31-year-old star are fake. “Several of the shots are legit — namely the black bra, the bikini, the v-neck … all of which Olivia has previously posted on her blog or Twitter. But according to sources, the ones where you can’t see her face are 100% fake … including the nude shot,” says TMZ.

Always a comedian, Munn used her Twitpic account to joke about the scandal by posting a picture of a chubby baby and cat with the comment, “If you ever hacked my phone, these are the pictures you’d find.”

I’m not sure if this is such a big deal as both Munn and Hendricks rarely seem shy to show off what their mama gave them. I guess if you are a celebrity, the best you can hope for that the “naked imposter” does right by you. Good lighting anyone? However, you would think that after Blake Lively, Scarlett Johansson, and Mila Kunis had similar incidents, celebrities would know to keep the naked shots off their phones.

I don’t know about you, but I wish more male celebs would be stupid enough to take some provocative cell phone pictures of themselves. Fingers crossed for Ryan Gosling!