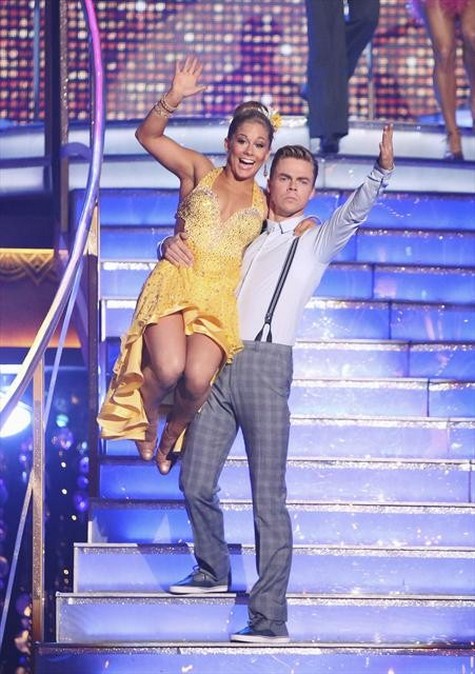 Shawn Johnson danced the Jive for her performance tonight on Dancing With The Stars All-Stars 2012 Season 15.  All 12 couples hit the stage performing either the Jive or the Quickstep to impress the judges and viewers at home, hoping they’re not the first couple sent home.   We recapped the tonight’s show for you and if you want to see how all the couples did go HERE!

Shawn Johnson and professional dancer Derek Hough dancing the Jive.  Shawn had this to say about the Jive, “I don’t remember liking the Jive at all.  It’s so fast!”  Derek said, “Most people don’t like the Jive. I’m not gonna lie. But the Jive is awesome!  “I really like the song. I like the energy. I like what we’ve done so far. I’m excited about it.”

Judges Comments:  Len:  “It was just enough Jive for me, there was just enough of everything and I want to see more than enough of Shawn.”  Bruno: “It was exhilarating and eye popping, I don’t think you can give more.”  Carrie-Ann: “I agree, you guys are the all star sweethearts.”

Watch the video below and let us know what you think? Do you think Shawn did enough to win the Mirror Ball Trophy? Sound out in the comments below!