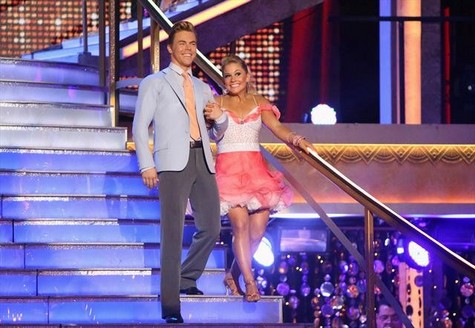 Shawn Johnson danced the Quickstep for her reinterpretation of an iconic dance on DWTS.  Shawn and Derek chose to recreate Helio & Julianne’s season 5 quickstep  on Dancing With The Stars All-Stars 2012 Season 15 tonight.  All the 11 remaining couples hit the stage tonight to reinterpret an iconic “DWTS” dance and face a double elimination on this week’s Dancing With The Stars.   If you missed the show, we recapped tonight’s show for you and if you want to see how all the couples did go HERE!

Shawn Johnson and and professional dancer Derek Hough, dancing the Quickstep.  Shawn said this about her dance, “I love it.  I love the challenge. I love the motivation that comes with it. I feel like the dance that we chose is like a standard and I just have to work harder to hopefully do better. I don’t want to compare it, ’cause I feel like it’s already an iconic dance so I don’t want to take anything away from it, but just do it in our own way.”

Judges’ Comments:  Len:  “Your ability to interpret music into movement is incredible, however I do have to drop a point for breaking the rules but I did really enjoy it.”  Bruno: “Spectacular and unforgettable, one of the best dances I have seen in fifteen seasons. You broke the rules, but I won’t forget this.”  Carrie-Ann: “That was by far the best dance we have ever seen, you broke the rules but it was pretty amazing.”

Watch the video below and let us know what you think? Do you Shawn did enough to win the Mirror Ball Trophy? Sound out in the comments below!