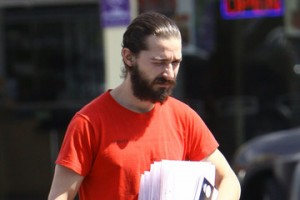 Who wants to see Shia LaBeouf in the nude? Raise your hand! Well today is your lucky day, my friends because we have the FULL VIDEO here. Shia has stripped down for a new music video for Icelancid band Sigur Ros and the guy isn’t even Icelandic (at least I don’t think so anyways.) The video Fjogur Piano is a seductive and sexually charged video that was directed by film maker Alma Ha’rel and co-stars Denna Thomsen.

So why Shia? Apparently Shia wanted to work with Har’el after he checked out her film Bombay Beach, which won a feature prize at New York’s Tribeca Film Festival last year.

Apparently this video was a piece of art that Shia couldn’t refuse. The video is unique to say the least but for some strange reason I can picture the visual coordinator of this piece on some sort of acid trip to create something so off-the-wall.

However, I will say this. This is WAY better than Transformers. I’m sure Megan Fox is thrilled that he isn’t speaking in this.

Check out the video below.