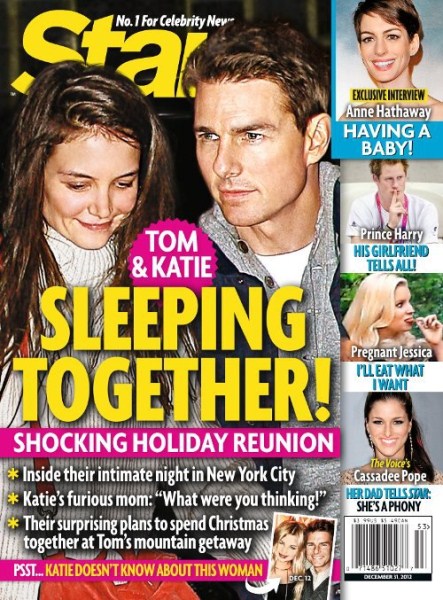 The current issue of STAR MAGAZINE features the cover story ‘”Tom & Katie – Sleeping Together.”  In a bombshell story the magazine claims that Tom Cruise and his ex-wife Katie Holmes have had a shocking holiday reunion.  Not only have they reunited, but the magazine goes on to claim they are sleeping together again.

Star has all the details on their intimate night in New York City.  Someone who is reportedly not happy about the reunion is Katie’s mother Kathleen.  She said to her daughter, “What were you thinking?”  Katie’s Mom and Dad have been thrilled that she has gotten away from Tom’s clutches.

Katie and Tom have plans to spend Christmas together at Tom’s mountain getaway.  It was previously reported that Tom would be spending the holidays with his kids Bella, 20, Connor, 17, and Suri, 6.  Tom said, “We are all going to be together. I am looking forward to it.”  I guess we now know why Tom was looking forward to it, it is going to be a real Christmas celebration with Katie back.

Lets just hope that Katie does not hear the current news, that Tom has been“dating” Jennifer Akerman.  Tom and Jennifer were photographed talking at his new film, Jack Reacher’s Stockholm premiere’s after-party.  If she hears those rumors it just might just put a wrench in Tom’s plans.

To find out all the details of Tom and Katie’s reunion, their Christmas plans and a whole lot more, pick up the current issue, on stands now!