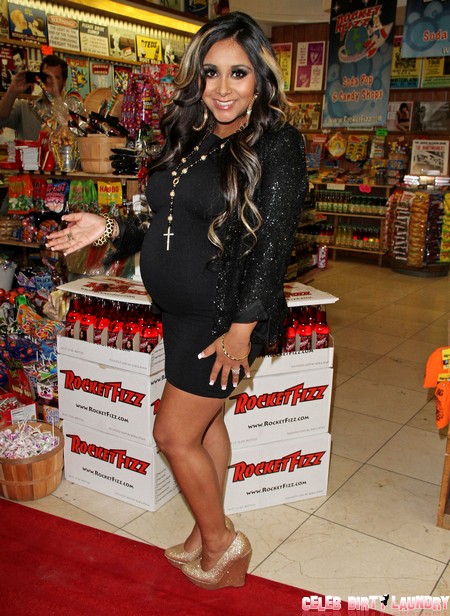 Nicole Polizzi, or ‘Snooki,’ as she is either affectionately or derisively known, depending on whether your I.Q. is two or three digits, is a modern American phenomenon.  Hailing from that MTV production of inestimable social value, Jersey Shore, Snooki has grown to matter to millions of people.  She’s neither clever nor attractive – and she certainly hasn’t displayed any talent that we’ve yet been able to identify. So what makes Snooki great?

Because make no mistake about it – Snooki IS great.  The girl is making a killing – marketing, appearances, promotions, ‘acting’ on reality TV, you name it and Snooki is there.  In fact she is very much like a junior version on Kim Kardashian.  You know what I mean – no talent – no ability – no redeeming features – and yet everywhere you look, there she is, right in your face… a celebrity!

But I think I might know what it is that Snooki does have that sets her apart from famewhores like Kim.  Snooki is REAL.  I get the feeling that with the Snookster, what you see is pretty much what you get.  I suppose that is why I don’t mind Snooki – she’s kind of cute, in an ugly sort of way.  Kim on the other hand strikes me as a complete monster who is capable of anything.  Sure Kim is quite good looking on the outside but when I see her I see an insect – a bug – an ugly bug – like some sort of alien life form sent here to destroy us and all that is holy and good.

But on to our tale – Snooki’s birthing plans.  Bottom line is that Snooki needs high heels and Pinot Grigio for a happy birth.  Snooki and Jionni better be careful – Mariah Carey and Nick Cannon almost got locked for mixing booze and babies!  Lucky for us, In Touch interviewed Snooki and her man, Jionni LaValle and you can read what the model couple had to say below.

Forget the hospital scrubs and oversized slippers! Nicole ‘Snooki’ Polizzi going glam when she rolls into the delivery room. “I’m packing my heels, my leopard print gown, eyelashes and makeup,” the Jersey Shore star tells In Touch. “I want to look good when [my baby Lorenzo] first sees me.”  {Author’s note – someone might want to tell Snooki that her baby Lorenzo won’t really be able to focus and ‘see’ her when he’s born – but it’s nice to know mom’s heart is in the right place}

Snooki, 24, also plans to wear her push gift – a Pandora bracelet with tons of baby charms that she trusts her loving fiancé, Jionni LaValle, will slide on her wrists before her September due date rolls around. The last item Jionni, 25, needs to stuff into their overnight hospital bag is a nice bottle of Pinot Grigio for his sweetheart to celebrate with afterward.

So there you have it.  Snooki insists on looking like Snooki no matter what.  What I want to know is if Snooki and Jionni plan to homeschool Lorenzo.