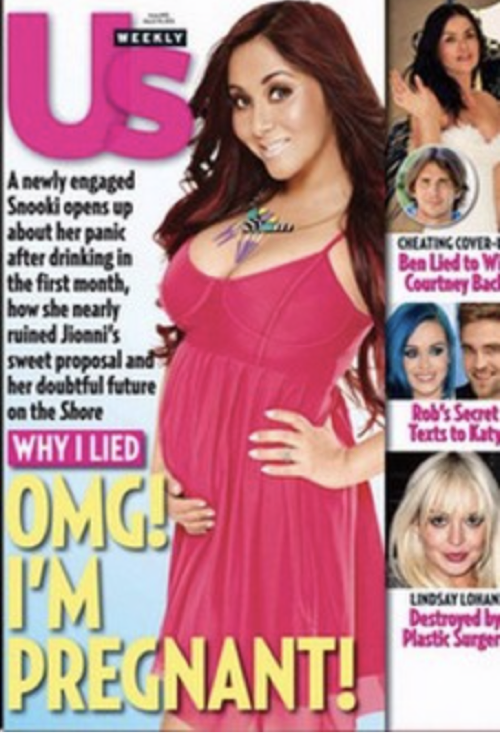 Nicole “Snooki” Polizzi may be five months pregnant but that’s not stopping her from throwing down with gestationally-challenged Jessica Simpson. Simpson is hopefully at the tail end of her pregnancy and has created quite the debate over her increasing weight gain which she attributes to a lot of amniotic fluid.  She must have enough amniotic fluid by now to float a baby whale.

But Snooki is less than empathetic. The pint-sized Jersey girl recently told US Weekly, “I would die if I were her size!” But she’s not the only castmate from the shore house with something to say. Pauly DelVecchio also chimed in on the Fashion Star host’s bowling ball sized baby bump saying, “She’s like 45 months pregnant now!”

But rest assured Snooki fans. She says there’s no fear of her pulling a Jessica because she’s really trying to incorporate a healthy lifestyle while her bun’s in the oven.

“She said she indulged in everything that she wanted. I’m trying to each healthy — fruits, lots of jelly and Italian ices. Nothing fattening at all.”

And it appears to be paying off. While Jessica have been hitting the towns in muumuus every color of the rainbow, Snooki says she hasn’t even turned to maternity clothes yet.

“I’m so skinny that I can wear larges or extra larges. I only just bumped up to a medium,” she revealed. “I’m five months and you can’t really see anything. It’s gonna pop up in like a week.“

And saturated fats aren’t the only things Snooki’s changing about her life. Snooki, an anti-bullying advocate, has reformed her Jersey Shore ways since announcing her pregnancy and engagement to fiancé Jionni LaValle. She’s given up partying and drinking and even her bronze skin telling reporters she hasn’t tanned since August.

“It’s different because now I’m not drinking,” Polizzi notes. “I’m usually partying and going to clubs but pregnancy made me grow up a lot.”

She might think she’s growing up but ripping on Simpson to reporters may not be the most mature action. We all know Jessica’s the size of a house but moms should stick together in these life altering situations rather than treat them as reality show fodder.

What do you think? Is Snooki bullying Jess or does Jess deserve it?  But even if Jess deserves criticism, Snooki’s behavior can still qualify as bullying.  Let us know what you think – sound off in the comments below.