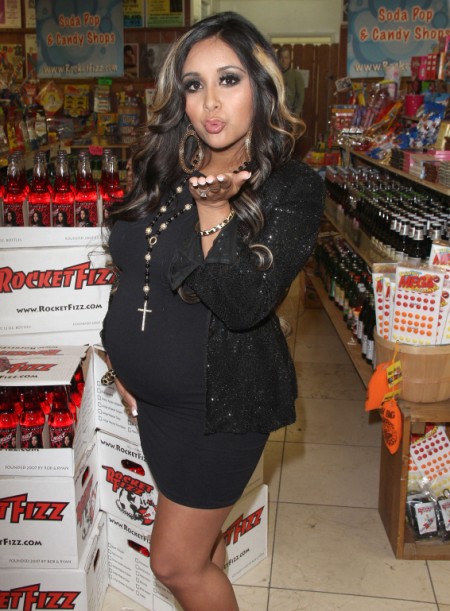 Jersey Shore star Snooki, a.k.a. Nicole Polizzi, is set to pop and revealed to In Touch magazine that she’s worried she won’t be winning any Mother of the Year trophies anytime soon. And this is a new concern because why?

Oh, Snooki! I’m just messing with you! I’m sure a woman who says such insightful things like, “I think I just broke my vagina bone” and “I feel like a pilgrim from the friggin’ 20’s washing sh-t right now” has many admirable qualities to offer America’s youth.

“I’m nervous that I’m not going to be a good mom,” she admits to In Touch. “I just really hope I know what I’m doing!”

The reality star says being pregnant has been crazier than a night out at the Jersey Shore! “At the Shore you’re going to hook up, get into a fight or go to jail. You only have three options. But being pregnant you have no idea what’s going on!”

And while Snooki’s been preparing for her son’s arrival with apps that tell you what you should be eating and how big the baby is, she’s adamant about skipping Lamaze classes!

“I don’t think anyone really knows what they’re doing with the first kid,” she tells In Touch. “But I think I will be a good mom. I hope so!”

OK, so I had my fun at Snooki’s pregnant expense. You show me a woman who knows she’ll be a great mother and I’ll show you a woman who doesn’t have children yet. It’s a natural fear. Do I think Snooki has more cause to worry? Most definitely. She doesn’t exactly scream apple pies and Friday family game nights but I’m sure she can raise a kid. Hell, Mongooses are great parents and they’re savage little monsters!

She’s young. She’s impressionable and she got rich quick by making an ass out of herself on national TV. What’s that kid have to worry about? However, I’ve always thought Snooki’s smarter than the average bear. There’s a difference between being a f-ck up for reals (see also: Prince Harry) and playing a part to make millions. Snooki is obviously the latter so maybe that kid has a chance after all.

What do you think of Snooki’s baby worries? Is it natural to freak out right before becoming a mom or does that baby have a rude awakening ahead of him?