BY Cate Meighan on August 22, 2012 | Comments: 3 comments
Related : Reality TV, Recap, So You Think You Can Dance, Television 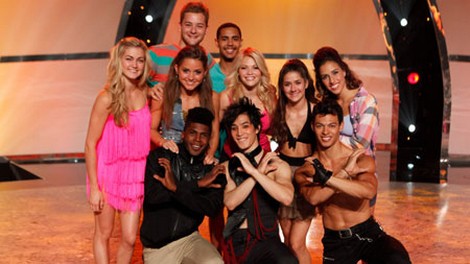 Tonight an all new episode of So You Think You Can Dance airs on FOX. This week the Top 10 dancers of Season 9 will perform and two will be eliminated.  Did you watch the last episode? If you did not we have a full and detailed recap here!

On last week’s show the Top 14 dancers had to wait two excruciating weeks to find out who would be leaving the competition Wednesday night. Luckily for them, they probably didn’t have much time to worry because they had been tasked with re-creating some of the show’s most famous works by one of its most respected choreographers, the Queen of Contemporary, Mia Michaels.

The Top 14 dancers opened the show with a group number, “Hanging On” by Active Child, which was choreographed by the night’s honoree, Mia Michaels herself. While paying homage to Mia, the dancers also revealed some of their favorite non-Mia moments. For Cyrus, it was when his roommate, Bryan Gaynor, was auditioning in Nashville. Eliana’s was Wade Robson’s “Peace Dance” during Season 3.

On tonight’s show the Top 10 finalists perform, this time with a SYTYCD All-Star dancer with an expertise in ballroom, ballet, hip-hop, contemporary, or jazz. After their performances, we will find out which two dancers will be ending their journeys.  Tune in to see if your favorites make the cut and who is sent home.

The top ten dancers opened tonight’s show with a Gene Kelly tribute choreographed by Tyce Diorio, of course.  The legendary dancer would celebrate his hundredth birthday tomorrow and his wife is in the audience tonight.

We’re bringing back the all-stars tonight and Tiffany is paired with Brandon to kick things off with a Doriana Sanchez disco number. Usually the disco routines are okay but this one was actually pretty amazing. Doriana cranked up the difficulty and tricks and these two handled it all well. Judge Mary Murphy counted eleven lifts in less than two minutes, perfectly completed by these two.

Witney is paired with season one winner, Nick Lazzarini for a Travis Wall contemporary piece that is intended to make Witney look as sexy as possible.  She’s cast as a smokin’ hot jazz singer and she really looks the part and hits the moves.  Nick is a great partner for her.

Cole is lucky enough to be performing a cha cha with Anya Garnis, an all-star from season 3. Add to that the fact that season 2’s Dimitri Chaplin is choreographing it!  Anya said the practice kicked her butt and the dance was really fast. Cole somehow managed to keep up with Anya but the chemistry wasn’t there. His partnering however was fabulous.

Lindsay takes a trip down Broadway Lane with all-star Jacob. Spencer Liff creates a dance made out of shadows for them. The majority of the time Jacob is behind a screen acting as Lindsay’s shadow and the effect is amazing. I predict we’ll see her in the finale.

Will and Katherine drew a Bollywood routine out of the hat and all-star Katherine helps Will play the part of a snake charmer. It’s super fast and really well done. So far there isn’t a weak number tonight!

Cyrus is paired with season 3 all-star, Jamie. It’s a Travis Wall contemporary piece and Cyrus, as an animator should NOT be able to partner like he does!  The raw energy makes you want to watch him but also as a partner he was completely trustworthy. Jamie knows how to partner b-boys and she brings out the best that they have to offer.

If you’re going to be doing a Dave Scott hip hop routine like Chehon is this week, then you’re going to need a partner like season 3 alumni, Lauren.  It’s a smooth number that has Lauren’s character kind of lifting and supporting Chehon through the whole thing.  They just kind of flow and groove through the whole thing but I think on a night of so many absolutely amazing piece’s, this might be one of the weaker ones.

George has the good fortune of being paired with season two’s Allison and Tyce Diorio to pull together one hell of a jazzy Broadway routine.  He’s a man that opts to miss a train to chase after a gorgeous woman and man do they both sell it. It was fun and hot and one of the most entertaining numbers of the evening.

Eliana is paired with Alex Wong for a contemporary routine by Stacey Tookey.  It’s a quiet, subtle piece to the old Nancy Sinatra song, Bang Bang and it garners a standing ovation. It’s mature and strong with absolutely effortless lifts.

Audrey joins Twitch for a Dave Scott hip hop routine to close out tonight’s performances. They portray a kind of creepy on/off relationship.  Of course it’s awesome if it includes Twitch but surprisingly, Audrey keeps up with him!

As soon as the performances wrap up everyone is called to the stage and Witney and Audrey are told that they are the bottom two girls from last week. The guys joining them in the bottom two are Chehon and George.  Only one girl and one guy are going to be saved of those four.  Nigel announces that all four will be dancing for their lives.

As soon as the performances wrap up everyone is called to the stage and Witney and Audrey are told that they are the bottom two girls from last week. The guys joining them in the bottom two are Chehon and George.  Only one girl and one guy are going to be saved of those four.  Nigel announces that all four will be dancing for their lives.

Witney shimmys her way across the stage and I’m telling you, this firecracker isn’t going anywhere.  Not to minimize Audrey’s solo because she is amazing but, there is a but.  Chehon shows what it means to dance for your life and he makes it so smooth and easy.  As I say that George takes the stage and his contemporary moves remind me of a younger Travis Wall. I just don’t know which guy should leave tonight — talk about an impossible choice!

Nigel gets to deliver the bad news. He says that both girls are fantastic and going on tour but (of course) only Witney is staying in the competition.  The guys are much more difficult to decide. Nigel tells George that his solo was absolutely gorgeous but Chehon will be staying on the show for at least another week.  Tune in next week to see the top eight perform!