BY Robyn Good on July 25, 2012 | Comments: one comment
Related : Reality TV, Recap, So You Think You Can Dance 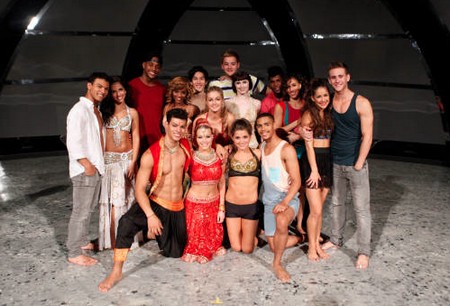 Tonight an all new episode of So You Think You Can Dance airs on FOX. This week the Top 16 dancers of Season 9 will perform and four will be eliminated. Did you watch the last episode? If you did not we have a full and detailed recap here!

On last week’s show the Top 20 got a second change to perform and after their performance six dancers, three girls and three boys were in jeopardy.  Four dancer were sent home by Nigel Lythgoe, Mary Murphy and guest judge Adam Shankman.

The bottom three girls and boys were named.  In danger last week, Alexa, Janaya and Witney for the girls.  Boys in the bottom three are Nick. Daniel and Chenon.  Nigel explained that this year things are different and a girl and a guy will both win. He was aiming to be unemotional in the cuts because all 20 are the best dancers in the country.  That said, Witney was safe.  That was kind of a no-brainer.  The guys take the stage and Chenon was safe.  Just like that, we are down to 16 dancers.

On tonight’s show the top 16 competitors dance their heart out to stay in the competition.  The guest judge this week is Christina Applegate.  The remaining competitors in the competition are: Lindsay Arnold and Cole Horibe; Witney Carson and Chehon Wespi-Tschopp; Audrey Case and Matthew Kazmierczak; Amber Jackson and Brandon Mitchell; Eliana Girard and Cyrus Spencer; Janelle Issis and Dareian Kujawa; Amelia Lowe and Will Thomas; and Tiffany Maher and George Lawrence II.

Tonight’s recap:  Tonight’s top 16 dancers opened the show with The Here and After, choreographed by Tyce Diorio. It was shot in black and white so that it would look and feel like an old silent film that used a red umbrella as a prop. It was pretty cool and the moves were tight. Tonight’s guest judge is Christina Applegate, who is always a welcome addition.

Tiffany and George are up first with a NappyTabs hip hop routine. They play new parents that need to use patience and team work to get their baby to sleep. Yes there is a crib onstage while they dance to Out of my Mind. Nigel Lythgoe thought George looked tired but loved Tiffany. Mary Murphy thought they both sold it. Christina thought Tiffany was an awesome blend of tough and scary.

Amber and Brandon drew a Ray Leeper jazz piece that is meant to be very sexy. Dr. Feelgood by Aretha Franklin sets the mood and finally, a vehicle to see what these dancers can really do. Christina has never seen Amber dance better. She thinks her passion really came out and Brandon sold it and supported Amber perfectly. Mary loved the soul.

Janelle and Dareian are up next with a cha cha and we are all fortunate because SYTYCD alumni, Pasha Kovalev is choreographing. I never thought of Call Me Maybe as a ballroom song. I expected them to do much better and there just seemed to have been a real disconnect between the two.  Christina thought it wasn’t their best and Mary agreed.  Nigel thought Dareian needs to watch his feet and he thought the usually sexy Janelle just wasn’t, tonight.

Lindsay and Cole dip their toes into the contemporary world with choreographer, Mandy Moore.  They dance to Charlotte Martin’s Wild Horses and I’m beyond impressed. Lindsay is a ballroom girl and I never would have thought that she could do this. Absolutely gorgeous shapes and shadows.  Nigel called it magnificent and thinks Cole is genius. Mary tells Lindsay that she has all the magic in the world.  Cole’s martial art training obviously has helped him, but he seems unstoppable.

Amelia and Will are doing a jazz routine with Mandy Moore.  You is a return to the funky jazz stuff that Mandy loves to put together.  Christina loves their chemistry and thinks that they embrace every style. Nigel didn’t feel this number and thought that they didn’t connect at all. Mary landed right in the middle on this one but she thinks Will is by far the best partner on the show.

Audrey and Matthew are dancing a salsa this week with Liz Lira attempting to help them.  Mary thought it was very uncomfortable. Christina agrees and thinks they are usually on fire. Nigel makes it three that didn’t like it at all. Tonight was just not their night.

Witney and Chehon get to perform a Stacey Tookie contemporary piece tonight.  It’s an impossible love story, two people that have to be together but can’t.  The music is Whitney Houston’s I’ll Always Love You and boy did they kill it- in a good way.  Christina is in tears and calls them the painters, not just the muses. Mary is also in tears and she mentions the “catch jump thingy” which had Witney sail over Chenon’s head and then drop to his knees in half a second. Nigel calls them flawless.

Eliana and Cyrus have the most brilliant NappyTabs hip hop routine of the night. Set to a reboot of Britney Spears Toxic, they play robots. This caters to Cyrus but ballet dancer Eliana was unreal. I never would have thought she could do those isolations. Mary tells them they are “both on the damn train”.  Christina calls them both sublime. Nigel is thrilled that Cyrus pulled this routine.

Amber hits the stage performing to This Is What Makes Us Girls. It’s a great solo. Brandon lays out a strong step routine to Gimme My Stuff Back. He owns it. Eliana finally shows off what makes her an absolutely stunning ballerina. Last up is Dareian who leaves his heart on the stage to John Legend’s Ordinary People.

Nigel breaks the news that it’ll be the end of the road for Amber.  Lindsay was always staying and Eliana earned her spot with her hip hop routine tonight.  Next up comes the guys. George is safe right off the bat.  Nigel says he has to choose between unique and a guy with tricks galore. Brandonhas to leave tonight.  The top fourteen dancers return to perform in two weeks (after the Olympics).