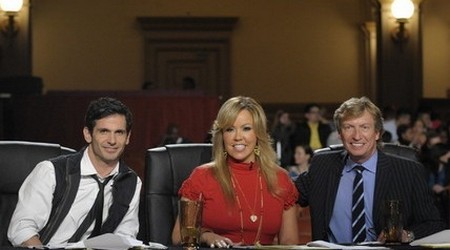 Tonight on FOX is an all new episode of So You Think You Can Dance. On tonight’s show it is the final Season 9 auditions before they head to Las Vegas. If you missed last week’s show, we have a full and detailed recap here for you.

The first dancer up last week set the bar high and we are predicting she will make it far.  Her fellow dancers were on their feet when Nigel referred to her as magical. She and her contemporary style are going straight to Vegas.

Another great performance of the night was Joshua Alexander, he made me forget that I was working for a minute. His audition to Alicia Keys was just stunning. He reminds me of Danny Tidwell from season three. The judges said nothing, but waved Vegas tickets at him.

Tonight on SYTYCD the judges head to Salt Lake City, Utah for the last of the auditions.  After this the contestants will head to Las Vegas.

Stay tuned for our live coverage of the show tonight at 8 PM EST! Meanwhile, while you wait hit the comments and let us know what you think of the preview video below of tonight’s Season 9 Episode 4 of “You Think You Can Dance?”

RECAP:  Wow!  Another week has flown by and it’s time for another installment of SYTYCD!  This last stop on the audition trail brings us to Salt Lake City, Utah.  WillAmerica’s favorite dancer find its’ way into our hearts for the first time tonight?  Well let’s watch and see.

The audience appears to be on a RockyMountainhigh as guest judge Adam Shankman joins Nigel Lythgoe and Mary Murphy.  Witney Carson starts off today with a Cha-cha/tango.  She has been a latin ballroom dancer since the age of 8.  To quote Adam Shankman as she begins to move, “Holy mother of god”, this girl is hot and just unreal.  She has great technique and a sharpness that reminds me of Season three’s, Anya Garnis.  Straight to Vegas Witney goes.

Up next is a chick doing an alien space dance.  She says a force entered her body that made her dance and she calls on the help of her three spirit guides.  She was working in an aerospace engineer company but left it all to find herself.  By the time Lynn Gravatt starts to move everyone is baffled.  She is weird for sure but happy.  Her dancing is lackluster to say the least but they let her down very easy.

Dee Tomasetta comes from a huge Italian family with a bunch of super protective brothers. She is absolutely stunning even before her music begins. Her contemporary audition is breathtaking. She lives in the moment with great technique and seamless transitions. Sending her to Vegas is an obvious move.

The bar is set high and contestants realize they need to stand out. Next up we have a scrawny guy named Gene Lonardo who shows us the lifestory of a Preying Mantis. He is bizarre with green makeup and little else on, but when it comes to movement, he is unique and entertaining. His technique is fabulous and Shankman said, “You’re sort of brilliant.” Gene gets his ticket to Vegas which is ironically, his hometown.

Lindsay Arnold is a latin ballroom dancer that has also trained in contemporary and ballet.  She is a sharp technician and has a lot of good performance quality.    The judges think her career will skyrocket and she is great, but I much preferred Witney Carsons’ earlier style.

Finally, a crumper.  You pictured a tough dude right?  Nope, she’s a little blonde named Mariah Spears.  They comment on her stank face and are amused by her love of riding horses in her free time.   She is really good at what she does and then need to see what else she can do in the choreography round.

Murphy Yang’s family all but abandoned him a year ago.  He chose dance over a career they had in mind for him and their response was to disown him.  He is charming and entertaining. He is a B-boy with minimal training but his love of movement raises him above a lot of others in this competition. He is put through to choreography.  Unfortunately, he isn’t strong enough to get a ticket to Vegas, but I suspect he’ll be back.

The second day of auditions in Salt Lake Citybrings Dareian Kujawa to the stage.  He reminds me of Neil Haskell or Travis wall– any of the great male contemporary dancers that have done well in this competition really.  He is just magic and he makes it all look so effortless.  He’s on his way to Vegas.

Johnny Ahn and Whitney Hallan are a ballroom couple that can dance but have zero chemistry together.  They have been paired up for 8 months and look very sharp for such a short period of time. They get sent to choreography.

Adrian Lee was this close to appearing on season 7 of SYTYCD but was cut at the eleventh hour by Mary Murphy who traveled to his home to deliver the bad news.  He then took a year off of dance before realizing he needed to continue his passion.  He has come back stronger and with a mountain of confidence and a great foundation.  Of course he is headed to Vegas.

The final dancer in all of the auditions completely moves the judges.  Leroy Martinez runs a program for after school kids.  He wants to give back the gift of dance that was given to him.  He is the only man in his family not to do jail time or to have serious legal problems.  He is a really big guy with smooth transitions, tight isolations and his stops and freezes are hard to believe.   He is inspiring and the theater is on their feet for him.  He is a positive influence and he is taking that positivity right into the choreography round.  Unfortunately he isn’t strong enough for Vegas.

181 dancers have made it through the audition round and onto Vegas.  There all but twenty dancers will be cut.  Tune in next week when things begin to get serious in Vegas!