BY Cate Meighan on August 15, 2012 | Comments: one comment
Related : Reality TV, Recap, So You Think You Can Dance, Television 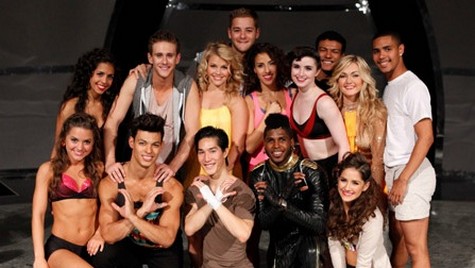 Tonight after a three week hiatus because of the London Olympic games an all new episode of So You Think You Can Dance airs on FOX.  This week the Top 14 dancers of Season 9 will perform and two will be eliminated. Did you watch the last episode? If you did not we have a full and detailed recap here!

On the last show the Top 16 competitors did their best to impress, hoping to win over fans and judges before the Top 14 and the names of the two dancers going home tonight were announced at the end of the show.

While the judges said they were shocked to see any of these three girls in the bottom group last show, they decided to also save Eliana – and send Amber home.

The guys were next up to hear their fate. The judges saved George, saying they had no idea why he was in the bottom three. The judges also decided to save Dareian, due to his incredible solo tonight.  That meant Brandon was going home.

So you think you can dance returns tonight with this season’s Top 14 finalists performing once again before learning which dancers will be ending their journeys. Tune in to see if your favorites make the cut and who is sent home.

Tonight’s recap:  Tonight’s show starts off on a super high note, as this episode is only featuring performance’s choreographed by Mia Michael’s.  I’m a fan and BEYOND excited.  They show opens with the top fourteen dancers performing a new routine that was phenomenal. It looked like it was meant to be a black tie party but the couples did half of it as an Arial routine. Spinning, flying and changing positions- just amazeballs.

Cyrus and Eliana are up first with the routine to Mercy from a few seasons ago.  It features a door as a prop separating a fighting couple.  Cyrus was phenomenal in this with all of his little ticks and things that he added to the original choreography.  They both were very strong performers. Nigel thought it was great as did Mary. The Ballet Boys are in the guest judging spot and they were as impressed as the veteran judges.

Tiffany and George are up next revisiting Adele’s Hometown Glory.  Mia wanted these two to out dance the original performance and they absolutely did. I’ve got chills. The transitions, lifts and assisted run were absolutely flawless.  The Ballet Boys comment on how Tiffany didn’t seem to need a partner because she does it all herself with ease. Nigel thought George was mesmerizing and Mary tells them they “murdered it”- in a good way.

Amelia and Will are performing what was known as “The Butt Dance”.  This will probably be one of the weaker Mia numbers of the evening, not because it’s not great but because other things will stand out more.  Amelia and Will are just magical together and they both bring characters to life pretty well. Nigel thinks the original sticks in his mind better than this will.  Mary liked it, didn’t love it, but thought they danced it well.  The Ballet Boys never saw the original and so they thought it was great.

Janelle and Dareian landed the infamous bed number for tonight.  This tells a story of a man with a broken heart and the piece is supposed to be filled with raw emotion.  Dareian really stood out here and unfortunately Janelle was left in the background. Ironically, she’s actually the brokenhearted one so she could have really told her own story.

Audrey and Matthew are performing the Time piece, originally done in season 3.  It was first choreographed as a dream where Mia reunites with her dad in heaven.  They are beautiful and in character (Audrey is even better than the original). But I think the original made a bigger impact because it was so raw for the dancers and Mia working together. Mary is choked up talking about the original and she thinks that Audrey is a shining star.  The Ballet Boys think Matthew kept dropping his performance and was disconnected. Nigel thinks that they just didn’t bring it.

Witney and Chehon pulled the prize that is known as “the bench routine” originally done by Travis and Heidi all the way back in season two. As Nigel put it, “The technique went with the story.”  It was originally about a woman loving a gay man that will never love her back and Witney nailed it as the tentative woman afraid to give her heart. Mary thought they were remarkable and fearless.  The Ballet Boys tell Chehon that he’ll always have a job with their company.

Lindsay and Cole were given Mia’s piece on addiction to recreate and they really pulled it off. The concept was that addiction is ugly so Lindsay had to be an ugly dancer. She struggled to do it but the end result was chilling. They are the best of the night.  All the judges agree that these dancers were chilling and completely versatile. You’d just never know what there area of specialty is.

Once the judges finished critiquing Lindsay and Cole it’s time to get down to business because four dancers are leaving.  George, Amelia, Janelle, Dareian, Matthew and Lindsay are all in danger and dancing for their lives.

Amelia’s solo to Falling Slowly is a contemporary confection whereas Janelle’s belly dance is something I’ve waited all season to see. Lindsay’s ballroom blitz while dancing for her life, combined with her versatility SHOULD win her the spot in the top ten for the girls. I hope.

George’s lines are on full display in So Long Lonesome. He’s fabulous. Dareian cracks out the old classic It’s A Mans World and he makes me forget all about George before him. Matthew takes a more classic contemporary approach and reminds me of a watered down Travis Wall. I’m going to hope Dareian gets picked to stay on the show for the guys.

Nigel cuts right to the chase and saves both Lindsay and George. He gives no critique of the other girls but says that Matthew needs to grow more as a performer and Dareian needs to point his toes more.  Not an easy night of eliminations coming on the heels of some fabulous dancing.  Tune in next week to see the top ten dancers perform!