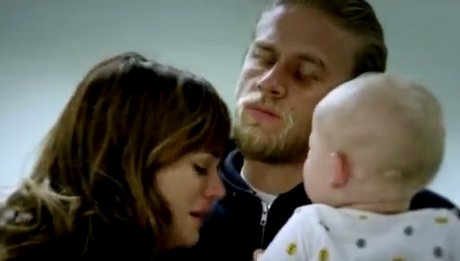 Doesn’t it seem like this season of Sons of Anarchy just began a few weeks ago? Well, unfortunately, it’s almost over! With only two episodes left in the fifth season, you can bet your bottom dollar that the drama will continue, and who knows how the producers are going to end this season. Anything can happen with this show. Anything. But I think we can all say for certain that there’ll be more explosions. The show will be back next week with an all new, action-packed, drama-filled episode, so if spoilers and previews upset your stomach then divert your attention now. Don’t say we didn’t warn you. If you missed last night’s episode click here to read our full recap.

The upcoming episode, which is titled “Darthy,” might lead to some surprises — big surprises. A lot of bad things have already happened this season, and I think we should prepare our lil’ SOA lovin’ selves for more unfortunate things. In the first few seconds of the preview, there’s an emotional scene that reminds us of Tig losing his daughter. Then, of course, there’s a scene with Jax. Pope tells Jax that Trager’s no longer has a purpose. And Jax says, “I’ll deliver him tomorrow,” to which Pope says, “If you break this promise . . . everything else goes away.” I noticed that SOA loves putting the “Dramatic Conversation” scenes in their preview trailers. It gets kind of old. Let’s hope Jax doesn’t break his promise!

Also, we can except a kiss between Gemma and Clay in this episode, and Jax will also contemplate his humanity. “You can’t sit in this chair without being a savage,” he says, so perhaps he will go Lindsay Lohan crazy on everyone.

As always, the promo clip reveals some action, and next week’s episode promises to be one that will leave you on the edge of your seat. Watch the preview below and let us know what you’re excited about! How do you feel about this season of Sons of Anarchy? Is it going well for you? What do you want to see happen next as we edge up close to the finale? Season 5 Episode 12 “Darthy” airs Tuesday, November 27th on FX. Check it out and make sure to come back to CDL for all your TV spoilage needs!