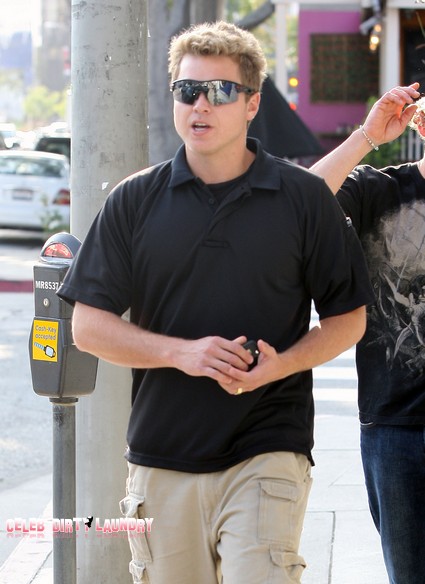 Desperate to get back the attention he had in 2009, Spencer Pratt has once again come out of the woodwork to prod former Hills star and fashion Guru Lauren Conrad. However, this time the 28 –year old reality villain isn’t up to his regular tricks accusing Conrad of making a sex tape or a variety of other offences. No, Mr. Heidi Montag is actually “trying to buy the hatchet” by wishing Conrad a Happy 26th birthday….pause for a delivery of Ex-Lax cupcakes paid for by what’s left of Montag’s Playboy money. 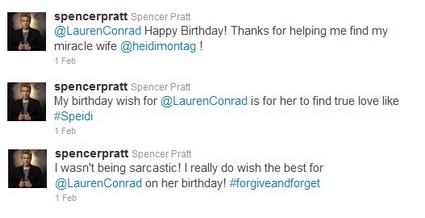 Pratt used Twitter on Feb 1st to wish Conrad Happy Birthday writing, “@LaurenConrad Happy Birthday! Thanks for helping me find my miracle wife @heidimontag !” The two famously butted heads, or would have if Pratt’s head hadn’t been so far up his ass.

For her part, Conrad proved to be the image of class—the kind who doesn’t air her life out on poorly scripted “reality” TV—and chose to ignore her former nemesis. “Lauren has moved past all the drama,” a source close to LC told US Weekly. “She’s focusing on her career and barely has time to interact with the people she actually likes.” The source adds that “in this case, like others, she’s going to continue to do what works best with Spencer and that’s obviously to ignore him.”

When it comes down to it, friends say Conrad just didn’t think Twitter was the appropriate place to discuss forgiveness, especially with Pratt who  is the reason she and former BFF/Roommate Heidi Montag no longer speak. “Lauren loves using Twitter to interact with her fans and promote her brands,” the source explains, “but obviously she doesn’t think it’s an effective way to apologize or try to mend bridges.”

Broke and living at home with mom and dad, Spencer tried to keep these 0.6 seconds of fame on him by commenting on Conrad’s cold shoulder. “We had our differences, but the fact is that Lauren was a part of our lives, both personally and professionally,” He told US Weekly. “After all this time, what point would there be in being angry? All I wanted to do was wish her nothing but the best in everything she does.”

Conrad, who designs a line called Paper Crown and blogs for The Beauty Department.com, celebrated her 26th birthday at the fashion line’s head office with her colleagues before returning to business as usual for a Thursday flight to NYC.