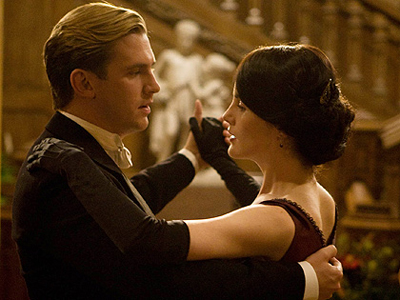 If you’re anything like us, you are already experiencing withdrawal symptoms from the end of Downton Abbey‘s second season. Finally, after several broken engagements (to each other and to other people,) Matthew (Dan Stevens) and Mary (Michelle Dockery) are finally going to be together! The sad news? Season three of the hit British show probably won’t air in the U.S. until January 2013.

Until then, we will have to content ourselves with the following spoilers for the next season:

-According to Zap2It.com, season three begins a few months after season two ends in the spring of 1920. This will give Matthew and Mary plenty of time to plan a wedding! And while there’s no certainty that they will walk down the aisle, Brendan Coyle, who plays Mr. Bates, recently let it spill that there is reportedly not one but two weddings taking place in season three.

-In the season two finale, Mary contemplates fleeing to New York and living with her American “grandmama,” and although Matthew convinces her not to go by proposing, it seems that Cora’s mom will make an appearance in season three and will be played by the incomparable Shirley MacLaine. We can’t wait to see Shirley trade barbs with Maggie Smith‘s dowager countess.

-Poor Mr. Bates was convicted of murdering his ex-wife in season two, and although we’re betting that he was wrongly convicted, it seems that he will spend at least part of the next season in prison. Could Sir Richard (Iain Glen) really have been the murderer behind Vera Bates’ death? That is what some people are speculating.

It’s going to be a long wait until season three, but it sounds like it may just be worth it! In the meantime, read about True Blood‘s upcoming season.