Spotted Out Partying – Has Demi Lovato Fallen Off The Wagon? (Photos) 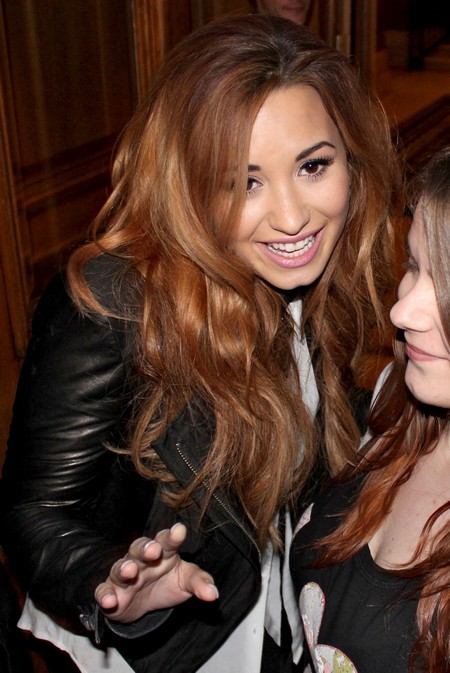 Could ‘sober is sexy’ Demi Lovato be off the wagon? Pictures surfaced yesterday of the Sonny with a Chance star out with a friend until two in the morning at Mercato Di Vetro in Los Angeles. The pics show Demi looking a little worse for wear but nothing incriminating is evident. Lovato is fresh off a stint in rehab last year for alleged cocaine, depression, cutting, and bulimia addictions.  Good pal Selena Gomez has already warned Demi that she has no more chances with screwing up.

And she’s been surprisingly candid about them. Lovato recently confided to Fabulous magazine about the pitfalls of fame and how she’s coping since leaving rehab. She spoke out against the vultures in Hollywood who prey on child stars giving them access to anything they want including drugs and alcohol. But despite declaring her sobriety, Lovato did say she was far from whole. “I’m not saying I’m perfect, or fixed, but I am learning to love and accept myself. My outlook is more positive and I am happy.”

If the 19-year-old singer is partying hard again it could prove embarrassing in more ways than one. Not only will she be called out for her recent interviews but it could put her contract with the X Factor USA in jeopardy. Lovato, along with Britney Spears, just confirmed there places on the panel as judge for the Simon Cowell-produced reality show.

That can be a lot of pressure of a young star just out of rehab and with a career that has stalled of late. The X Factor would be a huge resurgence for Lovato. But I can’t see Cowell putting up with Lovato-sized problems. Other names like Miley Cyrus and Avril Lavigne were floating around for her position and Cowell might consider replacing her if her issues start becoming high maintenance.

Hopefully these pictures are just Demi blowing off a little steam and getting in some girl time with her friends. The problem with having past addictions is that you’ll always be held accountable for them. That’s a lot of baggage for one so young. Hopefully Demi is staying true to the message she was so quick to convey out of rehab.

Do you sense anything smutty going on in the pics or should we just leave this young star alone?