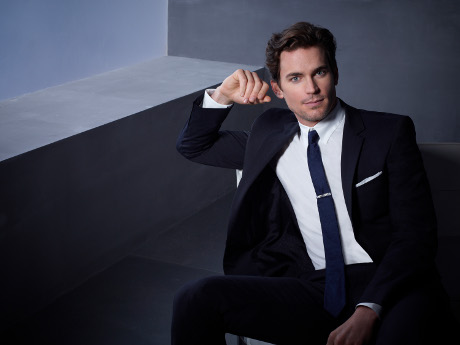 The star of White Collar, Matt Bomer, has just turned 35 and CDL would like to send him a big happy birthday shout out! White Collar, which airs on the USA Network, is a great show about a an ex-conman, forger, thief who, after playing games of cat-and-mouse for years, is finally captured. However, in order to get himself out of this unfortunate pickle, Neal Caffrey makes a deal with the FBI: he’ll put his skills as a conman to good use by helping catch other baddies. The FBI is reluctant, but they bite the bullet and welcome his work-for-release deal, which proves quite successful and fosters an unlikely but fruitful partnership with Peter Burke (Tim DeKay).

Matt Bomer has had quite a successful year. Wish him a happy birthday, write on the White Collar Facebook wall! Fans have kept White Collar a raging success and have propelled it into a fifth season that will premiere this coming January. Bomer also saw success with Magic Mike, a movie in which he plays a stripper alongside Channing Tatum, Matthew McConaughey, and others. Matt has also garnered a lot of attention recently as being one of the popular choices (among fans) to play the infamous, womanizing, BDSM-loving Christian Grey in E.L. James‘s crazy sexytime novel Fifty Shades of Grey. Final decisions haven’t been made yet, but James has hinted at the fact that she listens to her fans. A lot. So perhaps fans of this actor will get their way. Never know.

Matt is also set to guest star on an upcoming episode of Ryan Murphy’s hit new comedy The New Normal, which airs on NBC. Murphy tweeted yesterday: “guess who’s coming on The New Normal as Bryan’s sexy ex-boyfriend? The one and only Matt Bomer!!!”

White Collar won’t return until January for its new season, but while you wait why not catch up on past episodes? Leave us your favorite White Collar moments in the comments section below or chat about the potential Matt Bomer Fifty Shades of Grey role.