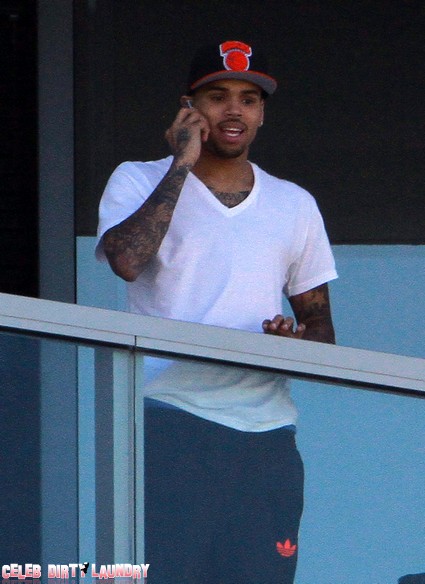 Why Chris Brown was amongst the guests at Rihanna‘s birthday party Monday has to puzzle a lot of people. Not only did Rihanna once seek and obtain a powerful restraining order against Chris for beating her up, but by inviting him she sends a message to the world that violence against women – domestic violence is not that serious – it’s more or less okay – if the victim survives.

Chris was convicted of assaulting Rihanna in 2009 reportedly delighted his former flame by turning up to the bash she hosted at her Beverly Hills home on Monday.

Guest Katia C tweeted:  “If Cupid was here he would be very happy everyone @Rihanna bday party was coupled up.  All I can say, CB was invited and she was acting like the happiest girl on her birthday and probably got what she asked for.”

Rihanna turns 24 on February 20 and she spoiled guests including Kelly Rowland and Bruno Mars with champagne, mermaid vodka ice sculptures, a Caribbean banquet, Cuban cigars, which cost $50 each, and 200 cupcakes and she and newly-single best friend Katy Perry particularly enjoyed the festivities.

A source told the Daily Mirror: “Rihanna and Katy had everyone going crazy. By the end of the night they started a cake fight and were dancing together while Bruno and Chris looked on open-mouthed, cheering.  Ri made sure Chris was having a good time but then he kept a low profile, spending most of the night in a corner with a few pals.”

“At one point Katy danced so much she broke her heels and had to leave the party barefoot.  Rihanna also had her own wardrobe casualty when her corset came undone but she didn’t let that stop the fun.”

Two conclusions we can draw from the party reports: Katy Perry is really just way too desperate these days trying to appear to have fun – can’t she just get over being dumped by Russell Brand.

The other conclusion is that Rihanna is looking for trouble if she allows a pig like Chris Brown back into her life.