Suburgatory Season 1 Episode 11 ‘Out in the Burbs’ Wrap-Up 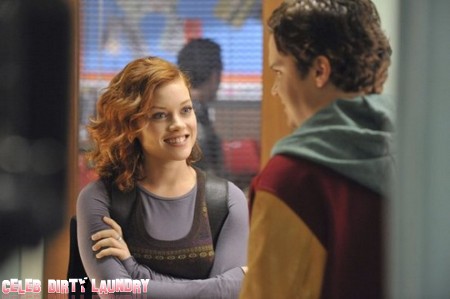 Did you watch tonight’s show? We watched the show and we recapped it for you!  I loved the opening part with George all soapy in a towel? Didn’t you think he was hot?

Dan Byrd guest starred tonight as a narcotics cop, Josh Sherman – what did you think of his performance? I love his acting.

George is still getting vibes that Dallas is hitting on him, when she offered him her ‘melons’ I couldn’t stop laughing at the look on George’s face, didn’t you think it was too funny? And when she ate the banana, I thought George was going to choke!

What do you think of Tessa’s ‘gaydar’, she was really off tonight wasn’t she? It was nice to see that a lesson was learned, not to judge a book by it’s cover.

I thought Lisa was funny when she was stalkin’ on Josh – she didn’t give up right till the end. What do you think about Lisa, did you think she should have been so obviously desperate for guy that clearly wanted nothing to do with her?

I can’t believe that Mr. Wolfe came out of the closet, Tessa wasn’t even talking about him and he took all her words as advice for himself and came out in front of the whole school.

What do you think about Dallas flirting with George? I think she is playing coy, you know she wants him and he knows she wants him, it’s just a matter of time before they hook up. Do you think it will happen soon or will she still try to be faithful to her loser husband Steve?

The funniest look tonight had to be when Josh told Tessa he was going to nail this guy and he jumped him, to arrest him of course because he was a narcotics officer. The look on Tessa’s face was priceless, don’t you think?

Dallas tried to downplay her kiss to George at Christmas, but the more she says it meant nothing, the more she tries to convince him that she’s not hitting on him, the more she is. What do you think about Dallas and George, do you want them to hook up? Where do you see their relationship going?

Next week’s episode 12 is called ‘The Casino Trip.’  George takes all the guys with him when he wins an all expense paid trip to Atlantic City. Tessa attempts to get some time with Scott Strauss.  Make sure to stop by for our recap!