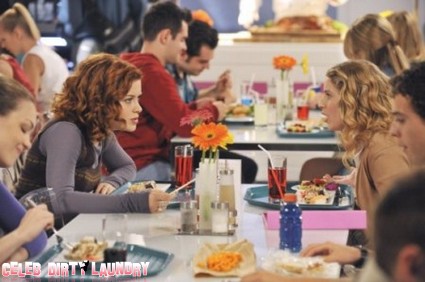 Tonight an all new episode of ABC’s hit show Suburgatory and we will be live blogging the show with up-to-the-minute details at 8:30 EST.  This is the eleventh episode of the first season and is called ‘Out In The Burbs.’  On last week’s show Dalia hired new driver Tessa to help her stalk her crush.  George jumps through hoops to join the local country club and finally figures out why he was dinked.  If you missed last week’s episode you can read our official recap here.

Suburgatory is my favorite new show and I am excited to see Dan Byrd on the show tonight.   In this episode we see a new side to quite a few characters.  Dan plays a new kid in school, to whom Tessa is assigned to be his “buddy.”  When showing him around school she becomes convinced he is gay.  It looks like it is going to be a great episode.

We will be live blogging the episode with all the details at 8:30 EST.  Make sure to come back and refresh often to make sure you get all the up-to-the-minute details!

RECAP: The episode starts with Tessa in the shower and the water cuts off, she comes out of the bathroom to find George also full of soap and in a towel, someone ran over the fire hydrant on the front lawn.

Rex is so excited to introduce new guy, Josh Sherman and he chooses Tessa to be his buddy since she is the newest kid on the block. Tessa shows him around, they bump into Kenzie and she calls Josh a loser, he retorts with calling her a loser back.

George is out to lunch with Noah and sees Dallas at another table, he thinks she is hitting him when she eats a banana seductively. George says that he thinks

Tessa introdes Josh to Lisa and she is smitten and thinks she has a shot with him because he hasn’t formed an opinion of her yet based on what everyone else thinks of her in the school.

Tessa asks Josh if he remembers Lisa form the day before that she introduced him to and he says no. All of sudden some guy at school is showing off and catches Josh’s attention and he gives him ‘that look’, which makes Tessa think that he is gay.

Later, Tessa tells George that she thinks Josh is gay and it bothers her that he is in the closet.

George is at the grocery store and Dallas asks him to feel her melons, she is really hitting on him. She asks George why he is avoiding her and he claims he isn’t.

Tessa tells Lisa that Josh is gay and more interested in her brother, she doesn’t believe it. Lisa is convinced that Josh is not gay, he is her future destiny.

Tessa goes see Mr. Wolfe, she tells him that she has a friend that is ashamed that he is gay and refuses to come out – so she wants advice from him about coming out.  She tells that she wished her friend would realize that people who don’t accept you for who you are, are not worth it.

Dallas is starting a new business, selling paper weights and she has convinced George to design it. She keeps giving him advances and making sexual inuendos. George loses it, he tells her that he is not going to listen to it anymore and he is not going to make out with her. He leaves her speechless and walks out.

Lisa dresses up like a guy to try and nail Josh. Meanwhile, Josh thanks Tessa for introdocing him to Dave, he is the one he is going to nail.

All of a sudden, Josh jumps Dave and arrests him for being in possession of drugs, oh, oh, Tessa’s ‘gaydar’ was way off – Josh is not gay, is a police officer.

George and Tessa are having dinner, she tells him that the guy she thought was guy was actually and undercover narcotics officer, she feels stupid that she jumped to conclusions.

George goes to see Dallas and apologizes for jumping to the wrong conclusion, but after the kiss at Christmas – Dallas explains that the kiss had nothing to do with him, it has to do with things going back in her marriage. Dallas tells George that she is excited about her new business and would love to have George work on it for her. Dallas

Tessa tells Lisa that Josh is married, meanwhile Mr. Wolfe makes an announcement that they had an undercover narcotics officer in school and that everyone should say no to drugs. He makes one more announcement, he tells the whole school that he is gay and then thanks Tessa for helping him to come out of the closet.