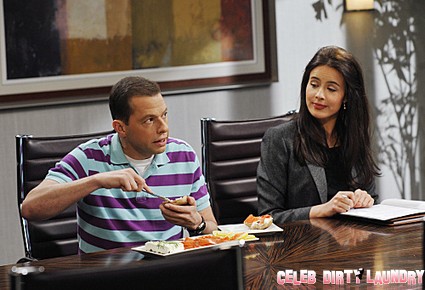 After a long, nearly three week hiatus, CBS’s Two & A Half Men is back tonight with an all new episode called ‘Slowly and in a Circular Fashion’.  Stay tuned as our sister site Fit Fab Celeb covers the show with all the up-to-the-minute results.

In the last episode of Two and a Half Men, we found out that Walden was brought up with a gorilla.  We also met his mother Robin and Alan fell for her.  Did you see the episode? If not, you can read the full official recap here. On tonight’s episode, Walden’s got trouble when his ex-wife and his mother try to take over his company and guess who he turns to for help, Alan.

The episode’s synopsis:  When Walden’s ex-wife and his mother try to take control of his company, he tries to enlist Alan as an ally, on TWO AND A HALF MEN, Monday, Jan. 2 (9:00-9:31 PM, ET/PT) on the CBS Television Network. Judy Greer returns as Walden’s ex-wife, Bridget, and Mimi Rogers returns as his mother, Robin.

Are you a fan and still watching the show? If so, sound off your comments below and let us know what you think about the show so far.  We will be covering the show with up-to-the-minutes results at our sister site Fit Fab Celeb from 9-9:30 EST HERE!

In the meantime while you wait for the show to start you can read some spoilers and a sneak peek video here!