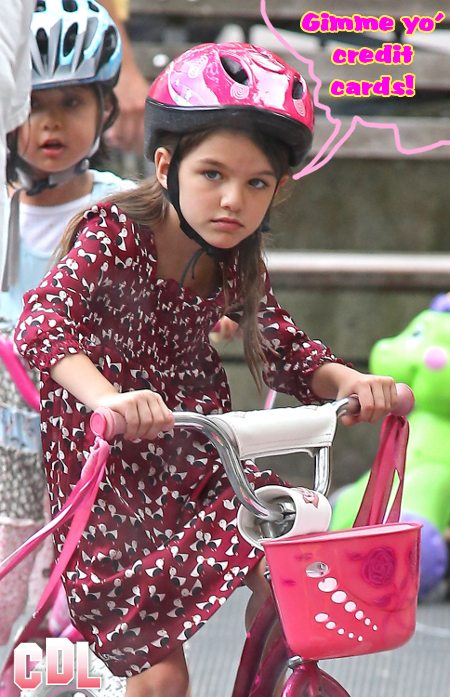 Star Magazine‘s most recent cover is dedicated to the bizarre habits of the rich, famous, and the very young. Suri Cruise‘s face takes up half the page, and apparently Katie Holmes is indulging Suri a bit more than a normal parent would — setting up a private space for her imaginary friends to relax in their home, and she’s even getting her a credit card (and not just for emergencies!).

Jezebel wrote: “Katie spent money on high-end furniture and had a designer decorate a room just for Suri’s imaginary friends.” So, what? They had an extra room, and Katie decided to follow Suri’s whim and pimp it out for a bunch of invisible kids to play in? Don’t invisible kids use invisible furniture though? Isn’t that part of the imagination side of it?

Now, considering the $33,000 a month in child support Tom Cruise is allegedly paying Katie, we aren’t surprised she has money to burn. But, even with a net worth of roughly $25 million, would it be so crazy to set some of that aside for college? Or possibly for the huge therapy bill Suri will rack up when she has to unload all of this crazy shit?

Perhaps the judge who awarded such an outrageous sum know something we don’t—that Suri gets the best, and that Tom needs to help pay for it! What do you think? Is Katie supporting Suri in her delusions, or just redoing a living room? Should a six-year-old kid have a credit card?