BY Nicholas Sanford on February 8, 2012 | Comments: one comment
Related : Survivor: One World 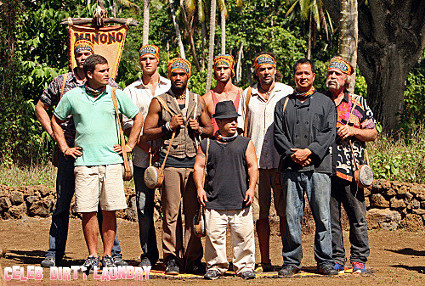 Earlier today we introduced you to the females who will be competing on Survivor: One World, so it’s only fair that we let you meet the cast of male competitors who’ll be living alongside them on the same beach. Survivor has employed the boy vs. girl theme in the past, but never before have they placed them on the same beach. Things might get messy, everyone. We definitely smell some drama on the horizon.

Without further ado . . . the gentlemen of Team Manono!

1. Jay Byars (25) is a model from South Carolina. He appears to be a good ol’ southern boy whose been part of numerous mission trips. He wants to play the game “to experience life in an exciting and challenging way.”

Jeff Probst says of Jay: “He’s going to prove to himself that he’s enough of a workforce around camp. I don’t think that many people would expect that, looking at him because he kind of plays that Southern good old boy. I think he knows exactly what time it is.”

2. Colton Cumbie (21) is a college student from Alabama who says he “didn’t play the victim and run home and cry” when he came out as being gay in the sixth grade. His reason for playing the game: “I want to play the game! The strategy, the challenges, I want it all! I don’t care about the fame or whether people love or hate me. I would love nothing more than to see my verbally abusive stepdad’s reaction when I win a million dollars on national TV.”

One thing we like about Jeff Probst is that he’s blunt — probably one of the bluntest and most honest hosts out there. Plus, he knows what he’s talking about. He’s been with the show forever.

3. Michael Jefferson (30) is a banker from Seattle, WA. Jeff Probst commentary seems to effectively sum up Mike’s character: “Michael’s going to go down as a villain. Straight out of the gate, he was stealing things from the women — which is fun, funny, legal, and a great move, all good qualities. I don’t know if he can be the likeable guy that says, ‘I was just playing the game” or if he’s just an aggressive, just-strong-arms dude.”

Mike says he wants to win it for his mom (because she loves the show).

4. Leif Manson (27) is a phlebotomist from California. His reasons for playing the game are slightly more personal: “To build my own self-confidence and to become more knowledgeable on what to ‘survive’ truly means.” Jeff Probst on Leif: “If Leif can just get in and survive a couple of travels, he’ll be OK. He knows the game, he’s smart, he’s tough, he’s physically fit and he’s got a good attitude. If Leif is at all nervous or brings any attention to why he’s different (because he’s a little person), I think it might be a reason to get rid of him.”

5. Jonas Otsuji (37) is a sushi chef from Utah. Jeff Probst says that Jonas has the potential to be viewed as too soft and too malleable, essentially too weak. And this could, quite possibly, be his ultimate downfall. Let’s hope Jonas can assert his confidence and dominate the competition.

To See Photos Of The The Manono Tribe CLICK HERE

6. Bill Posley (28) is from Venice, CA and is a stand-up comedian. Jeff thinks this guy has the potential to go far, primarily because he’s likable and a “sweet, caring” guy that you might want to be friends with.

7. Matt Quinlan (33) is a lawyer from San Francisco, CA. Based off of Jeff’s commentary, he seems like he might possibly be the arrogant-ass type: “Matt is another villain on the men’s tribe. He’s very good looking and very charismatic. If anyone sees Matt’s true colors, that he could be a little condescending, maybe a little misogynistic. Then that could bite him in the ass.”

8. Troy Robertson (50) is a swimsuit photographer from Florida who has a family of twelve marmoset monkeys. He seems like a pretty interesting fellow and, after reading Jeff’s commentary, it seems like he’s already gotten Jeff’s vote: “Troy can win this game. I think his zest for the game will be the key factor. It will either put him in a situation in an alliance that is so fun, and they like him so much that he does well, or he’ll become the guy that people will be like, “Yeah, Troy. We know.” And he’ll be voted out. I’m rooting for him.”

9. Greg Smith, M.D. (64) is a board-certified plastic surgeon. He is motivated by the adventure, the challenge, and to lose weight. Jeff Probst says of Dr. Greg: “Dr. Greg Smith, otherwise known as Tarzan, is one of the smartest guys we’ve ever had on the show. I told him right before the game started, ‘Your biggest obstacle is your own ego and feeling you need to tell everybody how smart you are and how good at everything you are.’ And if he does that, they’ll get rid of him. My prediction: He’s gone early.”

There are all the men from the Manono Tribe. How do you think the competition will pan out? We’re excited to see what will happen on the premiere. Survivor: One World is set to premiere on February 15th on CBS.