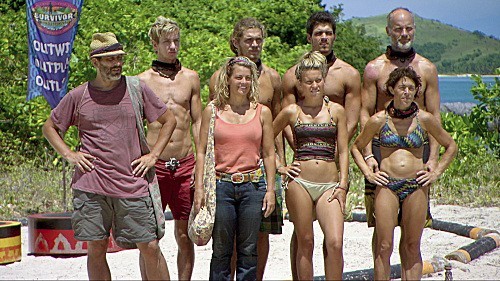 Tonight on CBS Survivor Philippines airs with a whole new episode called “Whiners are Weiners.” On tonight’s episode tempers flare when one castaway returns with a full belly and a bitter attitude. If you missed last week’s episode we have a full and detailed recap for you here!

On last week’s show an original alliance was tested while an unlikely friendship threatened to sway the game. A priceless reward proved to be a life-changing experience for some Survivors. At Tribal Council, Lisa told Jeff that she got more grace from the tribe she wasn’t in than the one she used to be in.

Abi-Maria threw daggers at Lisa and Jeff and was surprised at the clear animosity. Abi-Maria went on to say that she thinks Lisa would be voted out tonight. Lisa told Jeff that she has only been loyal to Tandang and needed to think about her decision tonight. At voting time, nobody gaves up their immunity idol, there was a lot of confidence in the tribe. With a vote of 4-5, Artis was sent packing and Jonathan “Penner” goets to live another day on the island.

On tonight’s show castaways compete for a luxurious spa getaway and tempers flare when one castaway returns with a full belly and a bitter attitude, on SURVIVOR: PHILIPPINES, Wednesday, Nov. 21 (8:00-9:00 PM, ET/PT) on the CBS Television Network.

Tonight’s episode: Lisa and Abi-Maria are having a chat about loyalty and Lisa tells her that she lost trust in her. Abi-Maria tells her that everyone else is being nice to her just because they want her vote. Lisa feels like she is taking control of her own destiny and is happy with the decisions she is making.

It is time for the reward challenge – Jeff splits them into teams. The yellow team; Jonathan, Denise, Lisa and Michael. The red team; Abi-Maria, Carter, Malcolm and Pete.

There are three drums, teams have to put their symbols up all together, first team to score three points wins the challenge and they win a spa day; a bath, a massage, pedicures and manicures, to top it off  there will be lots of food

We are already tied one, one – but it doesn’t take long for the red team to win. The red team really enjoyed their time during the challenge and when they return to camp, Abi-Maria can’t shut her mouth about it which is really annoying everyone. Denise loves that Abi-Maria is pissing everyone off, her whining is going to get her thrown out.

Jonathan approaches Lisa, Michael has approached him for the final four with Carter. Jonathan thinks they need to make a solid pact with someone at this point. Lisa and Jonathan approach Michael, he wants to get Abi-Maria and Pete out first but doesn’t want to make that true to the end deal. Lisa thinks Jonathan just missed out on the deal of a life time.

Michael and Lisa do what they have to, they make a final four deal with Denise and Malcom, but Michael is not feeling that confident about it.

Abi-Maria and Peter want to send home Malcom, he is the biggest threat on the island. Pete and Abi-Maria approach Lisa and she tells them she can’t give her vote, sorry.

Michael is rethinking his alliance, he is wondering if he should be in an alliance with Malcom since he is a strong player.

At Tribal Council, Malcolm is a little worried that his name is getting thrown around, but he is hoping that his alliance will keep him there.  Abi-Maria blames English not being her first language for her being rude to everyone all the time, Denise is shocked and the rest of the tribe is laughing at her. Denise and Abi-Maria get into a fight. Abi-Maria is crying and tells Jeff that she is not going to stop fighting, it is time to vote.

Abi-Maria decides to use her immunity idol, all votes for her don’t count. Two votes for Malcom and three votes for Pete. Pete is the eleventh person voted out of Survivor.