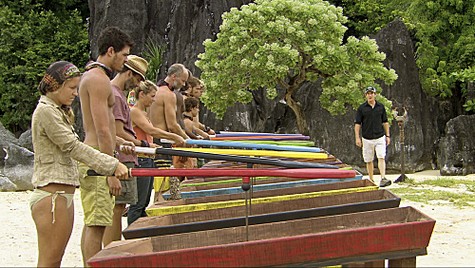 Tonight on CBS SURVIVOR Philippines airs with a whole new episode called “Little Miss Perfect.” On tonight’s episode a priceless reward proves to be a life-changing experience for some Survivors. If you missed last week’s episode we have a full and detailed recap for you here!

On last week’s show Jonathan needed to fight for his life, since he no longer had his immunity idol.   He really gave his all during the immunity challenge.  On last week’s show it was one of the most complicated and entertaining Tribal Councils. Malcolm and Abi-Marie both had idols and showed them to the tribe and Jeff. Lisa took a last ditch effort to grab her alliance together with plan B. Jeff thought the tribal council was entertaining.  Nobody played their immunity idol, there’ was a lot of confidence in this tribe, or stupidity. Here are the votes: Abie-Marie 1, Jeff 5 and Pete 4. Jeff is voted out and joins RC at the jury house.

On tonight’s show an original alliance is tested while an unlikely friendship threatens to sway the game.  A priceless reward proves to be a life-changing experience for some Survivors.

Tonight’s episode: Getting back from Tribal Council Jonathan admits that he voted for Abi-Maria. Lisa tried to make a big move, but it’s just not like her lying, betraying and breaking alliances.

There are five original Tandang left and if they vote together, Jonathan thinks he may just go home. Lucky for him, the old tribe mates are all over the place. Jonathan takes Lisa aside and wants to know why she thinks people don’t like her, she tells him because she lied to people but he tries to calm her by telling her that he admires her because that is how to play the game. Lisa bonds with Jonathan and shares an endearing hug.

It’s time for the reward challenge, they are being divided into two teams , they have to crawl in mud through an obstacle course to a bed of rice to find balls that they have to launch into a tall tubular structure.

The winning team gets to give and receive, they will leave to bring some children in a village some much needed school supplies. The yellow team consists of Michael, Artis, Lisa and Pete. The red team has Jonathan, Carter, Denise and Malcolm. Abie-Maria is sitting out again.

Malcolm launches the final ball and wins reward for the red team who enjoy a day away from the camp. Meanwhile, back at camp Abi-Maria can’t shut her mouth and basically acts like she commands the game.

It’s time for the immunity challenge, tribe mates have to land six balls on a paddle, the first person to complete it, wins immunity.  Michael aka Skupin, does it, he is safe at tonight’s tribal council but everyone else is fair game. Artis is thrilled, he is hoping this is their chance to get rid of Jonathan.

Back at camp, Abi-Maria couldn’t get more annoying if she tried, why they don’t give her the boot is beyond me. Thankfully, Denise thinks the same thing and just may shift the focus on to her.

Jonathan chills with Lisa and tries to Lisa to shift her loyalty over towards him, but her head is spinning, she wants to be loyal to her original tribe and feels bad to shift at this point. Jonathan is planting seeds with Lisa and really hopes he got to her. Jonathan second move is to approach Michael and try to get his vote, but he has to make sure that Lisa is firmly on whatever side he chooses.

At Tribal Council, Lisa tells Jeff that she gets more grace from the tribe she wasn’t in than the one she used to be in. Abi-Maria throws daggers at Lisa and Jeff is surprised at the clear animosity. Abi-Maria goes on to say that she thinks Lisa will be voted out tonight. Lisa tells Jeff that she has only been loyal to Tandang and needs to think about her decision tonight. Time to vote, nobody gives up their immunity idol, there is a lot of confidence in this tribe tonight. With a vote of 4-5, Artis is sent packing and Jonathan “Penner” gets to live another day on the island.