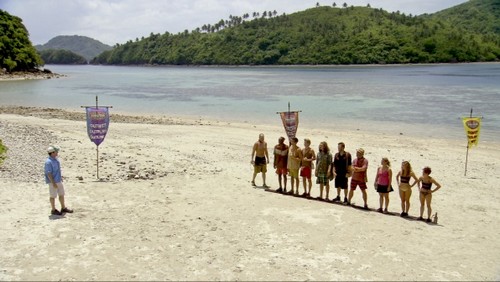 Tonight on CBS SURVIVOR Philippines airs with a whole new episode called “Dead Man Walking.” On tonight’s episode in one of the most complicated and entertaining Tribal Councils ever, a brutally honest conversation leads to surprising revelations. If you missed last week’s episode we have a full and detailed recap for you here!

On last week’s show after Tandang and Kalabaw tribes merged, castaways scrambled to solidify their numbers and rank in the new tribe. Meanwhile, Lisa Whelchel was confronted on her past as a former TV teen star. We already knew that Michael Skupin recognized her right away, but we found out that Jonathan recognized Lisa too and so far has no spilled.  Lisa also found Malcom’s immunity idol. At tribal council Jeff asked if anyone had an immunity idol, Jonathan produces his, therefore, any votes for him did not count and there were five of them. Pete got two votes and RC got four, the first member of the jury and leaving was RC.

On tonight’s show Jonathan needs to fight for his life, since he no longer has his immunity idol.  After last week when a lot of the castaways voted for him, he is going to be very nervous this week.  You just know he is going to be giving his all during the immunity challenge.  Also on tonight there is suppose to be one of the most complicated and entertaining Tribal Councils ever, a brutally honest conversation leads to surprising revelations.  I wonder if Jonathan is going to let Lisa’s secret out of the bag?

Tonight’s episode: Jonathan is hurt that he was betrayed in the last Tribal Council and trusted the wrong people. Meanwhile, Jeff is thrilled that Jonathan no longer has his immunity idol, now he is going to target to get rid of him.

Lisa wants to stay with Tandang, but she is full prepared to switch sides if she has to.

At the Reward Challenge, the tribe is ready to get to today’s challenge but first they must split into two teams and fight to collect puzzle pieces and then build the puzzle. The first team to build their puzzle wins a jungle cruise complete with ribs, potato salad and apple pie. Yellow team wins reward.

On the reward, the yellow team enjoy themselves immensely and are very thankful for winning. Jonathan tries to convince the rest of the team to make a move, to try and diffuse the attention on him. Lisa on the other hand is not trying to win at the point, she just wants to get into the final five.

Lisa approaches Mike and tells him that Malcolm has the hidden immunity idol and she wants to get rid of Jonathan who walks in during their conversation. A lot depends on immunity, it will be interesting to see who is going to win it.

At the Immunity Challenge, once again it is back up for grabs, but this week, there is only one, not two for a man and women each. The winner will be guaranteed a one in nine shot of winning this game. The tribe has to go through an obstacle course and collect puzzle pieces. Jonathan, Jeff and Pete are the final three to construct their puzzles, the winner is Jonathan, he lives to see another day.

Lisa tells Pete that Malcolm has the hidden immunity idol and he’s playing two sides. Pete runs right over to Malcolm and tattles on Lisa. Pete tells Malcolm that he wants to send home Jeff and after speaking to Malcolm, he thinks Lisa is lying about him having the immunity idol.

At Tribal Council, Jeff asks Mike if their is pressure on him tonight since Jonathan won immunity, he says yes. Malcolm tells Jeff that Lisa threw him under the bus today and she doesn’t deny it. Lisa defends herself in saying that Malcolm has the idol and she was strictly playing a smart game. Malcolm and Abi-Marie both have idols and show them to the tribe and Jeff. Lisa takes a last ditch effort to grab her alliance together with plan b. Jeff thinks the tribal council is entertaining, but it’s time to vote, no time left to negotiate or cut deals.

Nobody plays their immunity idol, there’s a lot of confidence in this tribe, or stupidity. Here are the votes: Abie-Marie 1, Jeff 5 and  Pete 4. Jeff is voted out and joins RC at the jury house.