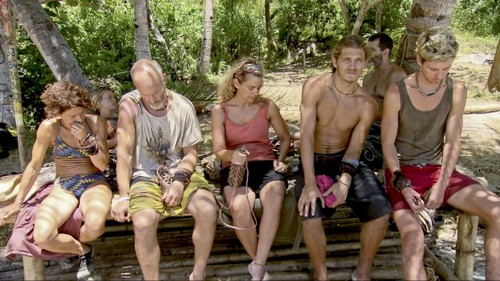 Tonight on CBS Survivor Philippines airs with a whole new episode called “Hell Hath Frozen Over.” On tonight’s episode castaways exhaust their funds on tasty rewards while one generous castaway makes two bids for his tribemates during the hearty food auction.  If you missed last week’s episode we have a full and detailed recap for you here!

On last week’s show castaways competed for a luxurious spa getaway and tempers flared when one castaway returned with a full belly and a bitter attitude. At Tribal Council, Malcolm was a little worried that his name was getting thrown around, but he hoped that his alliance would keep him there. Abi-Maria blamed English not being her first language for her being rude to everyone all the time, Denise was shocked and the rest of the tribe was laughing at her. Denise and Abi-Maria got into a fight. Abi-Maria was crying and told Jeff that she is not going to stop fighting.  Abi-Maria decided to use her immunity idol, all votes for her didn’t count. There were two votes for Malcom and three votes for Pete. Pete was the eleventh person voted out of Survivor.

On tonight’s show Abi is in trouble, no surprise after last week’s tribal council, will she be able to find a way out?  Castaways exhaust their funds on tasty rewards while one generous castaway makes two bids for his tribemates during the hearty food auction.

Tonight’s episode: Abi  is sitting by the fire with Michael and just continues to rain on the negative according to Denise who thinks she is the next to go, unless she wins immunity.

Abi and Malcolm head over to tree mail and she breaks down and starts crying about what Lisa said to her at Tribal Council. Malcolm’s heart goes out to her a little bit because she is so un-self aware. The tree mail reveals a fun auction.

Denise is the first one to spend all the money she has on food. Michael is the next one to shout out and buy wine and cheese. The next item is iced coffee and donuts, Malcom buys it. The next item will remain covered, it’s a blind bid. Penner bids $100.00 and he gets fried chicken and fries. Next item will also remain covered, Carter wins it and it’s a baked potato but Jeff is going to give him a choice to trade it for rice and beans for his whole tribe. Carter gives up the potato for the rice and beans. There is another covered dish, Lisa wins it and it is a gigantic sandwich with soda. Next is an advantage in the game, Abi buys it for all of her money. Another item and it’s covered as well, Carter buys it, veal shanks for the whole tribe, but only sixty seconds to eat it.

Everyone returns from the auction, Penner and Abi start having this conversation where she blames him for demoralizing her, then she babbles on and on. Meanwhile, Penner is thrilled at the more toxic Abi becomes because it provides him safety in the game.

It’s time for the Immunity Challenge; they will be attached to a rope  and in the first round they have to answer  a question, everyone is right except for Lisa and Denise and have to add 5% of their body weight in the challenge. This round requires the tribe mates to untangle the rope by jumping over and under a fence that it is tangled on. Lisa is out of the game, she finished lest. Penner, Carter and Denise add 5% to their body weight, they answered the next question wrong. Tribe mates are now untangling their rope in a bamboo maze. Denise, Malcom and Michael are out. Carter answered another question wrong and adds another 5% of his body weight, Abi joins in at the final round, this is her advantage that she bought at the auction. This is ridiculous, Abi wins immunity and a one in six chance of winning the game.

Malcolm is thrilled that Abi won, he wants Penner out and this is his chance. Lisa is conflicted, she is going to have to vote out someone she likes. Lisa sits down with Penner, she tells him that she wants to go to the final three with him, she doesn’t care about the money. Is she dumb? Penner sits down with Abi and Carter, he tells that they are voting for Denise.

Time for Tribal Council, Abi tells Jeff that her plan going in to the auction was to buy herself an advantage. Lisa tells Jeff that based on her decision tonight, she is going to disappoint herself. The only person that is truly safe is Abi, it’s time to vote. Abi votes for Denise, Penner votes for Denise. Time to tally the votes, Denise 3 votes, Penner 4. The person voted out is Jonathan Penner, he hugs Carter and when Abi asks him for a hug, he says he is not going to hugs anyone else. His parting words, “keep your sunny side up and suck eggs”.