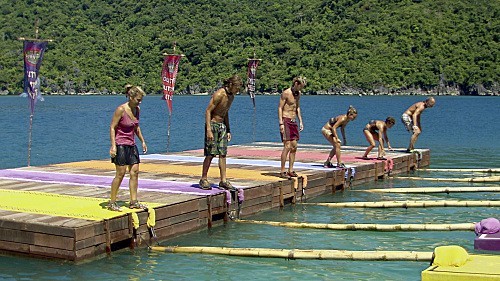 Tonight on CBS Survivor Philippines airs with a whole new episode called “Shot into Smithereens.” On tonight’s episode during an emotional family reunion, an exciting reward challenge enables castaways to join forces with their loved ones. If you missed last week’s episode we have a full and detailed recap for you here!

On last week’s show Abi was in trouble, it was no surprise after the previous week’s tribal council. The castaways exhausted their funds on tasty rewards while a generous castaway made two bids for his tribe-mates during the hearty food auction.

At last week’s Tribal Council, Abi told Jeff that her plan going in to the auction was to buy herself an advantage. Lisa told Jeff that based on her decision tonight, she was going to disappoint herself. The only person that was truly safe is Abi. Abi voted for Denise, Penner voted for Denise. Time to tally the votes, Denise 3 votes, Penner 4. The person voted out was Jonathan Penner, he huged Carter and when Abi asked him for a hug, he says he is not going to hug anyone else. His parting words, “keep your sunny side up and suck eggs”.

On tonight’s show at a secret meeting, an alliance devises a plan to get rid of their biggest threat. Meanwhile, during an emotional family reunion, an exciting reward challenge enables castaways to join forces with their loved ones.

Six are left, who will be voted out tonight? One thing is for sure it is four against Abi, they all can’t stand her. Abi thinks if she lies about having the immunity idol, she will save herself in the end. Meanwhile, Lisa is worried about Malcolm because he is playing a really good game.

Time for the Immunity Challenge and there is a big surprise, the tribe mates get to be reunited with a loved one. Michael’s son is there, Carter’s mother, Denise’s husband, Lisa’s brother Justice, Abi’s mother and Malcolm’s brother.

Malcolm, Carter and Michael are down to one but it is Malcolm who wins reward. So here is what’s going to happen, Malcolm and his brother head back to camp and get this, Malcolm gets to pick someone to have their loved one join them as well. Malcolm chooses Lisa, then Malcolm chooses another and gives it to Michael. Carter, Abi and Denise have to say goodbye to their loved ones.

Lisa shares her game play with her brother, while Malcolm is worried that his brother’s chatty personality might ruin his game. Between Michael, Lisa and their loved ones they come up with the big play of voting out Malcolm. But, Lisa is stuck on her word and doesn’t want to break it and betray Malcolm again.

Malcolm is worried that maybe Lisa’s brother got her snapped back to her senses because she is happy and smiling, a real difference from the way she has been in days past.

Time for the Immunity Challenge, time for Abi to give up the idol, it’s back up for grabs. Today they have to run across a balance beam in water to fetch a hook that is attached to a bag, there are three bags total. Once they have three bags they must head back and build a pole with the wood pieces they find in the bag and make a pole long enough and strong enough to knock over a target. Lisa and Michael seem to be in the lead so far with Abi trailing far behind. Malcolm wins immunity and is guaranteed a place in the final five, it is his first win.

Malcolm is thrilled, his mind gets a break, he doesn’t even have to think heading into Tribal Council.  Lisa believes God closed the door to Malcolm not being vote out. Michael starts talking game with Malcolm when Carter walks up and they make it no secret that they were talking about him, how he is a threat. Carter knows he is running a thing line and plans to remind everyone how much they don’t like Abi who has mean to each and every one of them. In the end, Carter doesn’t have to say anything, Abi just runs off her mouth and keeps threatening to use her imaginary idol if they try to get rid of her.

At Tribal Council Jeff does the math, it is either Carter or Abi going home tonight. Carter pleads his case and wants to be there another day because he deserves it. Michael says that voting out Carter is like voting out his own son. Lisa says that at this point, she would like to sit beside someone she can beat in the game.  Abi tells Jeff that she has found the fourth immunity idol.

Time to vote, three votes for Carter and Abi did not produce an immunity idol, her lie saved her. It’s down to the final five and I am hoping that the tribe has clued into Abi’s lie. Carter is voted out and loses his chance at a million dollars.